Public speaking is a nerve-racking position. Nobody wants to seem like a fool but it can be hard to do anything else when all eyes fall upon you with expectation. There was a poll a few years ago that asked Americans what their top fears were, and death came in second to public speaking. The Grim Reaper should feel relieved. Now imagine that you’re the leader of a country during a time of duress and you have a speech impediment. That’s the grueling circumstances for King George VI (affectionately known as “Bertie” to family), leader of Britain on the eve of World War II. The King’s Speech tells the inspirational true story of one of the most powerful men in the world finding his own voice.

Before becoming king of his country, Bertie (Colin Firth) was the Duke of York and a man suffering from a debilitating stutter. When stressed, it was difficult for Bertie to even read a statement. This speech impediment is made all the more troublesome now that the world has entered into the radio age; kings and presidents are now expected to speak to their peoples, no longer content to just be a striking figurehead. Elizabeth (Helena Bonham Carter), future Queen Mother, seeks out different speech therapists but the traditional methods are getting her husband nowhere. Then she comes across Lionel Logue (Geoffrey Rush), a self-taught speech therapist who worked with shell-shocked WWI soldiers in his native Australia. His methods are unorthodox but he’s the first to begin to get results with Bertie. The demands of his position get even greater when Bertie’s father, George V (Michael Gambon), dies in 1936 and Bertie’s older brother, Edward VIII (Guy Pearce) abdicates the throne. Now Bertie is expected to lead his nation, that is, if he can string two sentences together in public. 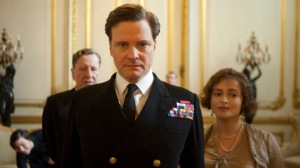 The King’s Speech is really the heartwarming story of the unlikely friendship between a king and a quirky Australian commoner. Their warm, humane friendship allows for several scenes of great humor and great drama. Watching the irreverent Lionel bounce off the proper and isolated Bertie supplies plenty of comedy. It’s essentially an odd couple comedy mixed with a true-life historical drama. There’s great pleasure in watching the chilly relationship between classes thaw, the men grow closer together, and Lionel’s unconventional tactics make progress. Each time Bertie discovers a new practice that removes his stutter, whether it is speaking while listening to music or speaking in the cadence of a song. This is a film that follows the English tradition of understatement even given the dramatic setting, principle characters, and a speech impediment. The characters don’t go around blurting their feelings, leaving the actors room to explore oodles of subtext. There’s a signature scene where Lionel coaxes Bertie into opening up by promising to allow him to paint a child’s model airplane (a treat for a man of title never allowed such toys). As he paints away, Bertie reveals a damaging truth about a neglectful childhood nanny. The truth is so painful that Bertie is forced to reveal it through the cadence of song, which somehow makes the revelation more sad and tragic. Their ongoing relationship is deeply satisfying and emotionally rewarding.

You won’t see a better-acted movie all year, thanks to Firth and Rush. More than following a checklist of gimmicks, Firth inhabits his character from the inside out. He feels like a living, breathing, somewhat broken person instead of a collection of ailments. Firth doesn’t overdo his stutter and treats the character, and the ailment, with a deep sense of compassion. Firth gives what is likely the greatest acting performance by any male in 2010. He is magnificent, commanding, and empathetic in every scene. Likewise, Rush doesn’t overpower as a personality foil. His character manages to be irreverent but without being flippant; he finds a reverent irreverence, if you will. Lionel is treating the future King of England, and the gravity of this stately relationship is not lost on him. Both men hide an inner melancholy, perhaps one of the things that ultimately bonds them together. Rush is flush with vigor and merriment, truly delightful to watch. This is his finest onscreen performance since he won his Oscar in 1996 for Shine.

The enormity of the king’s duties is given due care. You feel the weight of the crown that awaits Bertie and empathize with his quaking hesitation. Ever since childhood, his family looked down on Bertie. His father felt a stern tone would best aid the young stammerer, and his older brother would often belittle Bertie with cruel taunts. You see flashes of this unhealthy dynamic when Edward cuts down his little brother after their father passes. 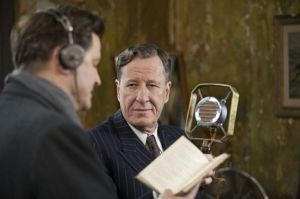 Bertie was seen as unimportant. Edward was the one set up for the throne. And yet Edward is the one who shirks his responsibilities in the name of love (a twice-divorced American woman). Edward refuses to become the leader of his people if the ancient rules forbid him from marrying a divorced woman. Bertie cannot buckle under the tremendous pressure and expectations that wait. Even when the rather passive Bertie lashes out, you feel like his anger is a moment of achievement. King George VI also had to deal with the fact that his brother is still alive and well and an alternative to the throne if Bertie is deemed incapable. Firth makes it easy to feel the remarkable pressure of being a leader not born or elected, merely expected. And even if an audience is clueless about British monarchy history and the rules of royal succession, The King’s Speech is easy to follow and comprehend for a daft American like myself.

Truth be told, The King’s Speech is a little stagy, a little square, and a little too fastidious for its own good. Hooper and crew are too content with making a pleasant moviegoing experience that the film lacks any slight form of edge. It’s all just a little too safe, a little too staid. While rated R, this movie could easily be a PG-13 family film, maybe even a PG one, sans the two sequences where Bertie unleashes a torrent of profanities in frustration (he discovers that he does not stutter while swearing). I feel like a curmudgeon for dinging a movie for being, essentially, too nice and gentle, but it clips the ambition of the movie when crowd-pleaser is the zenith of accomplishment. The fateful speech to the nation, on the eve of war with Germany, is even given an extra oomph thanks to the background music of Beethoven. A larger story of triumph seems reduced to the Oscar favorite storyline of Man Overcoming Physical Adversity. The direction by Hooper has some curious tics to it, like sequences of two people talking where they will never share the frame despite sitting side by side. I assume Hooper is trying to communicate some form of emotional distance or wariness, or perhaps it’s just a nod that different actors had unworkable schedules and could not be filmed together. Hooper is a talented director, as anyone who saw the massive undertaking of the masterful HBO miniseries John Adams can attest. However, like John Adams, Hooper is prone to TV-movie staging. His direction limits the cinematic power of the film. It looks like any ordinary episode of Masterpiece Theater.

The King’s Speech is pretty much everything you’d wish for in a movie groomed for awards consideration. This is prime Oscar bait. You may tear up at points, you’ll probably smile in many places, and your spirit will definitely rise. Plus it features some of the finest acting you’ll witness all year. And yet it’s that conscious need to please, to uplift, that can occasionally distract you from the many charms that The King’s Speech offers. The fact that the story is predictable is not a detriment, but the fact that the film doesn’t push harder, dig deeper, or expect more from its audience is a missed opportunity. The material is so rich, but a terrifically acted, smartly written film isn’t a bad consolation. Especially when that film happens to be one of the most rousing and rewarding theatrical experiences of the year.