The real draw for the first Paranormal Activity was that it was a word-of-mouth secret that became a sensation. You just had to see what all the fuss was about. It was the super cheap little indie that could and took the nation by storm. Of course, with any product that makes money a sequel must come. But it’s hard to repeat a phenomenon, just ask the makers behind Book of Shadows: Blair Witch 2 (an odd, fascinating failure). Paranormal Activity 2 is a decent slow burn horror movie but it can’t escape the long shadow of its predecessor. There isn’t enough new or interesting to justify this redundant exercise in standard low-wattage terror.

The first film involved the haunted bedroom of a couple, Katie (Katie Featherston) and Micah (Micah Strout). They filmed their nightly haunted shenanigans and it all didn’t end so well. Now we have Katie’s sister and her husband. They’re welcoming home a brand-new baby boy, Hunter, when they find their home has been trashed. Rooms have been upended but no valuables are missing. The family gets a home security system installed with multiple surveillance videos to spy for intruders. Of course these cameras also begin catching strange occurrences in the house. It seems a sinister presence is after the baby. Apparently demons love children, did you know this? Hell has a really fantastic T-ball team.

Like most other gimmick movies, duplicating the same effect leads to diminishing returns. Part of what made the first film work was its relative freshness and creative ingenuity. For a measly $11,000, director Oren Peli was able to fashion and sustain a mood of mounting dread that also stayed within the confines of the “found footage” concept. He built up suspense gradually and lead to some terrific “boo” moments. I’m still amazed how Peli was able to pull off some of his tricks sight unseen with such a minuscule budget. Part of the appreciation of Paranormal Activity was the level of skill for the craft. Now along comes a sequel with a $3 million budget, which is still chump change by Hollywood’s standards. However, it’s a large enough figure that I never once questioned how they were ale to pull anything off. I expected more from the sequel given the budget and the general nature of sequels to inevitably up the ante. You’ll still be scanning the frame of those surveillance camera angles, looking for any sign of something amiss or strange. The whole process can be maddening in both a good and bad way. Much of whatever tension does build is in these moments of uncertainty waiting with baited breath. It can seem like an interactive group game of Where’s Waldo. You’re sort of relieved when something actually does happen to break the nothingness.

As a whole, Paranormal Activity 2 doesn’t work as well when it comes to the construction of their scares. The first film primarily took place in one location, the bedroom, the sanctity of the modern man’s domicile. Whenever we got to beddy time we knew what waited. A visual vocabulary had been built to get the audience sweating as soon as the characters sleep. And isn’t disrupting our sleep the ultimate home invasion? With the sequel, there are multiple cameras to work through, always opening with the same shot of the pool cleaner busy at work. We start with pool cam, then after a while we add one more, kitchen came, then stair cam, etc., but we always cycle back to the original before moving forward. It can become an especially tiring pattern, especially when early camera angles prove to have nothing going on within. The pool-cleaning robot emerges as the breakout star of the film (evidently the first sign of a haunting is a dirty pool). There are some effective scares but it’s all in the jump scare/gotcha variety. The film toys with the possibility of a night vision mode for the ever-present camcorder tossed around the home. This possibility is woefully underutilized and only saved for a mad dash through the house at the conclusion. 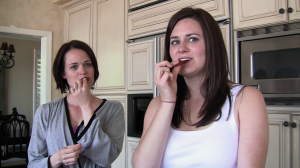 Repeating the same haunting elements may work in a narrative sense but it also mitigates the impact. You know what to expect. Hearing loud noises or watching doors slam shut does not offer the same jolt the second time around, especially on a larger budget. It’s unavoidable that Paranormal Activity 2 will become a victim of the first film’s success. Unless it raises the stakes, the movie is just going through the same paces with different faces. This time there’s a baby that’s being sought after by a malicious spirit. If all you’re doing is raising the “innocent quotient” of the victims then the film might as well be set in a impoverished Bangladesh orphanage where the kids all have terminal diseases as well. Paranormal Activity 2 tries to repeat the same tricks to mixed results. The scares are too few and far between and none have the same power as in the first film. The climax is lazily similar as well.

Unlike the first film, much of the movie feels like it’s just filling time to space out its scares. You won’t feel any true sense of attachment to these people nor will you get excited when they parcel out morsels of back-story (the first mom died and… what?). Instead of a young couple we now have a young couple… with a baby! And a teen daughter too but really it’s all about the baby. The family members sit and talk at length rationalizing the weird phenomenon. They even perform research on the Internet and make sure to record themselves with a camera they set down. Who does that? Who records simple conversations? The family’s main dilemma is that dad is unreasonably skeptical despite strong video evidence. Why do these people still let the baby sleep alone? Why haven’t they brought the baby’s crib into their own bedroom? The family pet, a trusted German shepherd, is good protection. The dog growls and barks because animals, just like Hispanic housekeepers the film asserts, innately know when evil spirits are afoot. Why do Hispanic women all have fine-tuned demon radar in the movies? Is this a feature that a Caucasian male can upgrade to? Apparently, the best protection you can afford your home is multiple dogs and multiple Hispanic housekeepers to stand guard.

Paranormal Activity 2 attempts to deepen the mythology of the franchise. It takes place both before and after the events of the first movie, providing some explanation as to what the demon is really after and how it came to terrorize Katie. It’s nice to watch how the two movies fold on top of each other and guess what areas will next connect. Katie makes numerous appearances and ironically offers the sage advice to her sister to just ignore those bumps in the night. When Micah makes an appearance he is accompanied by onscreen text that informs us that this is 3 weeks before his dead body is found. Why? We already know thanks to Katie’s early presence that the film is a prequel, so we already know the doomed fate of Katie and Micah. What does spelling it out have to offer the audience?

Paranormal Activity 2 runs into problems when it imitates what worked previously but doesn’t add any new flavor, escalation, or variety. The freshness of the concept is quickly turning stale. What was new and exciting is now being written into rote rules for the franchise. I can only surmise that the Paranormal Activity franchise will follow the same downward slide as befell the Final Destination franchise once the audience became hip to all the rules. Surprise goes out the window when films are made to meet genre expectations. You’re still relying overall on your imagination for much of the scares in Paranormal Activity 2, which will vary depending upon the individual. I just think it’s harder to trick you the second time around. My brain kept saying, “I’ve already seen this movie. Been there, done that.” I had no actual rebuttal for my brain, so I ate some popcorn and scanned the screen looking for more weird stuff.