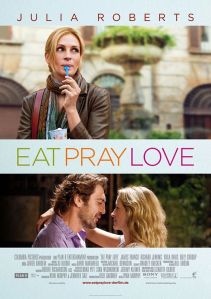 Eat Pray Love is based on the best-selling memoir about Elizabeth Gilbert (Julia Roberts), a woman in her 40s trying to recover from personal setbacks. She’s divorcing her husband and she’s generally unfulfilled with her life. It seems to be missing meaning. Her solution is to set off on a journey to Italy, India, and Bali in order to rediscover who she is and what is missing in her privileged life.

Granted I am not in the target demo for this movie’s audience, but I found the main character to be rather hard to relate with. The film opens with her deciding to end her marriage to Billy Crudup (Watchmen). So far I’m okay. The dissolution of a marriage, especially when you’re older, is a prime starting point to reevaluate your life now that you’re on your own and, frankly, terrified by that prospect. But then the movie presents Gilbert as a rather self-involved and almost callous individual. Her husband is devastated, but she’s only tear-eyed one night as she prays to God why she’s in her marriage. The movie throws out some half-hearted excuse, saying her husband is wishy-washy about his career, but it’s a smokescreen. Why even leave this stuff in there if we’re just going to dislike Gilbert? That’s like including an opening scene in Schindler’s List where Schindler beats a child. A hyperbolic example, yes, but proof that it’s a terrible idea to have an early scene harm audience sympathy.

And so Gilbert goes about on her globetrotting voyage of self-discovery, chiefly to fulfill her health, spirit, and heart. Except the movie seems to get worse with every stop on the map. The overly long beginning in New York shows that our flighty main character shacks up with a hunky theater actor (James Franco), and then agonizes over how unhappy she is with this new guy. She needs to learn to love herself before anybody else, she says. In Italy, she finds freedom in losing herself to food. She feasts on fine Italian cuisine and doesn’t obsess over her weight gain. In fact, she and a buddy treat shopping for larger sized jeans as a joyous celebration. I’m pleased that people can become more comfortable with their bodies. This Italy section focuses on food and fellowship, and Gilbert learns the language, enjoys the company of a group of locals, and cooks a traditional Thanksgiving dinner for her new friends. This is easily the most likeable Gilbert will be in the film.

First off, a film about a character finding personal discovery and self-awareness is going to be hard to pull off. Internal journeys of self-actualization and enlightenment don’t necessarily scream great movies, a medium of images and movement. For this to work you need a good story and a character worth rooting for, somebody who the audience can empathize with and cheer on the arduous path to personal grace. Elizabeth Gilbert is not that character. The other two segments in India and Bali are a true test of patience. Watching Roberts sway around, chant to herself, and look forlorn waiting for enlightenment to come is not the best use of 40 minutes. Richard Jenkins (The Visitor) gives the film’s best performance in the most tedious segment, which kind of reignites the “tree falling in a forest” scenario. When Indians have spiritual crises do they travel to New York? The end feels even more leisurely paced and I found myself nodding off here and there. The movie was failing to keep my attention short of some lovely scenery.

Director Ryan Murphy, co-creator of TV’s Glee, knows that his audience wants beautiful countryside, beautiful food, beautiful men, and Julia Roberts smiling. To that end, Eat Pray Love is a success. Murphy seems to enjoy filming the food sequences the most. The food is portrayed like a glamour reel. It’s easy to feel the rumbles of hunger while watching this movie. Pizza from Naples looks divine. But Murphy also serves as co-writer, along with Jennifer Salt, so he should have known better about the plot deficiencies that keep the audience at a distance from embracing Gilbert. The actors all seem to be having a good time, and why wouldn’t they? Visiting exotic places and stuffing their faces with local delicacies? It feels like I’m watching someone else’s boring vacation videos that go on for 135 laborious minutes.

Eat Pray Love seems to be missing something, namely the soul of its journey. By design, so much of this existential crisis is internal, which is where the book can fill in all the clarifying and illuminating details to make this feel like a full story. As a movie, it just doesn’t work on screen no matter how powerful Roberts smiles. The main character is hard to relate to. How many people can solve a midlife breakdown by flying across the world for over a year? How did Gilbert afford this? I’ll tell you how. Gilbert pitched the idea to a publisher and then used the advance to pay for her yearlong trek of dining and self-discovery. It makes me doubt how genuine this whole journey really was, considering she sold the ending before she ever reached her catharsis. Maybe the title should have been Eat Pray Cash Check.