Director Tim Burton seems like the perfect candidate to take on the imagery of author Lewis Carroll. I would argue that, short of Dickens’ Christmas Carol, Alice in Wonderland is the most reproduced piece of literature in modern history. It’s going to take a keen vision to make these old characters interesting (the macabre American McGee video game sure felt like it could have been born from the mind of Tim Burton). Unfortunately, Burton and some 3-D wizardry are not enough to compensate for a story that only works in one dimension.

Alice (Mia Wasikoswki) is now a teenager girl who can barely remember her jaunt to Wonderland in her youth. She’s assigned to marry a simpering lord because in Victorian England that’s how women took care of their futures. Alice is more interested in taking over her dead father’s trading company. So when the time comes for her lord to ask for her hand in marriage, Alice stammers, says she needs some air, and chases after what looks like a rabbit with a pocket watch. She falls down a rabbit hole and winds up back in Wonderland, however it’s really known as Underland. It’s been 13 years since Alice visited this magical world, and in the meantime the Red Queen (Helena Bonham Carter) has ruled as a tyrant quite fond of removing the bond between head and neck. Her sister, the White Queen (Anne Hathaway), was deposed and lives in exile. The (W)underland residents live in hope that an Alice will return and free them as an old prophecy foretells. She’ll have to rely on old friends, like the Cheshire Cat (Stephen Fry) and the Mad Hatter (Johnny Depp) to fulfill her destiny, and, why not, slay the Red Queen’s fearsome dragon, the Jabberwocky. 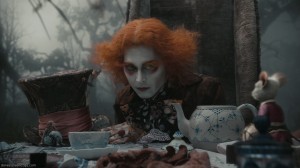 You would think that the combination of Burton, Depp, Lewis Carroll, and 3-D would produce an irrefutable masterpiece, at least from a visual and entertainment standpoint. I’m compelled to argue that the finished results are pretty much a mixed bag. The world of (W)underland seems fairly drab. Sure it was some big stuff and some weird stuff but from a color standpoint everything comes across as washed out, like Burton took one look and said, “Bright colors equate happiness. We can’t have that.” I understand the world wanting to convey a dispirited mood, but this isn’t any regular Burton film, this is Alice in Wonderland and we need a sense of, wait for it, wonder. Instead, we get an overwhelming feeling of drabness. Now, full disclosure, I didn’t catch the 3-D version of this movie for two reasons: 1) my wife’s head was hurting and she couldn’t take 90 minutes wearing nose-pinching, eye-hurting glasses that play with her depth of field, and 2) the 3-D shows were all sold out. I could tell which elements where intended to pop in a 3-D environment, namely the Hare always throwing objects as a calling card and the materialization of the Cheshire Cat. The tone isn’t too dark to scare the Disney families but at the same time there’s a bit more menace to the proceedings. The Red Queen’s bulbous, disproportionate head makes for an eye-catching visual that doesn’t get stale. (W)underland is a more hostile world but at the same time it’s not too threatening. Pretty much all the villains have some moment of redemption that makes them less threatening. The weirdest motif in the movie is eye gouging, which happens twice thanks to the same diminutive character.

Having said that, this is a visual decision that I could live with if the story engaged my senses more. Alice is now an older 19-year-old girl that has to defend (W)underland by fighting a dragon and suiting up in armor. She has to accept her destiny and be THE Alice and save the kingdom. The mystery of whether Alice is the one true Alice, look no further than the title, folks. He doesn’t remember anything from her first encounter in (W)underland and yet she has no sense of awe or curiosity. Also, why now do the residents of (W)unerland seek out Alice to rescue them? They never thought about reaching out in the 13 years the Red Queen has been ruling?

The plot is a fairly pedestrian “hero’s quest” that ends in a fairly pedestrian battle sequence where the armies of good and evil clash in CGI combat. The problem is that the original Alice in Wonderland source material really didn’t have much of a plot to it; it was really more a satire of the times, which featured Alice essentially going from one oddball to the other. The appeal was more the language than the story. It’s not the easiest piece of literature to adapt, to find a through line for a plot, so I guess making it about a hero’s destiny seems like the easiest, laziest path. The screenplay by Linda Woolverton (Beauty and the Beast) assembles all the memorable characters but gives them little else to do, other than act mad. You may start to feel Alice’s sense of frustration after a while. Because of the threadbare story, you know exactly where the movie is going to be headed (wow, unintentional pun). In some ways this movie functions as a sequel and in some ways this movie functions as a remake, meaning that the plot is pretty much stuck trying to decide where to go next in a standard fantasy narrative device.

And then there’s the dance scene. Oh, the dance scene. How do I approach this gingerly? The climax that’s established is not Alice slaying the dragon, accepting her destiny, and (W)underland triumphing over the Red Queen’s tyranny. The climax is Depp break-dancing. You read that right, though the residents refer to his crazy legs movement as “futterwackin,” which sounds suspiciously naughty. It’s a moment so goofy, so tonally inappropriate that it shatters the entire notion of suspension of disbelief. It rips you out of the movie and all for a cheap laugh. It’s bizarre. I acknowledge that, given the fantasy framework, that the ending ought to stay in touch with the fantastical setting. But break-dancing? Would The Wizard of Oz have ended better if the Tin Man and the Scarecrow started break-dancing? At least the Tin Man could effectively perform the Robot. It’s a real-world artifact that has no place in the world of fantasy. 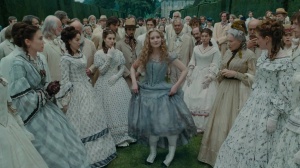 Depp is usually such a valued performer, digging deep into his character and reveling in their eccentricities. He’s the strangest and most exciting character actor that has become a box-office star. But that doesn’t mean he’s immune from giving a rare bad performance. While nowhere near as off-putting as his Willy Wonka, Depp’s Hatter is more distraction than anything. He comes across like a figure grappling with post-traumatic stress, causing him to mutter incomprehensibly in a Scottish brogue. He’s tiresome after a while. Carter (Sweeny Todd) can be pretty shrill, playing the same overwrought note time and again, but she still manages to give the best performance in the movie. Hathaway just sort of acts flighty and raises her arms, waltzing around like she’s trying to imitate Depp’s Jack Sparrow. She’s entirely wasted. Stephen Fry (V for Vendetta) is a delight as the voice of the Cheshire Cat, and our heroine, Wasikowska (HBO’s In Treatment) has a striking Grecian presence, even if her performance is more dour than it needs to be given the fanciful environment.

Tim Burton and Johnny Depp usually make for an unbeatable creative team, but I think Disney was the key figure in this arrangement. Alice in Wonderland wants to thrill without getting too scary, wants to delight without getting too original, and wants to dazzle without getting too weird. Burton’s visual inventiveness manages to make the movie entrancing at times and bewildering when the rest of the movie fails to live up to those fleeting moments. Truth be told, I actually enjoyed the real-world Victorian scenes more than many of the ones in (W)udnerland. The film is just too disjointed and uneven to fully embrace, regardless of the 3-D upgrade. There are moments that I adored and moments that I could have lived without — like the break-dancing finale. The finished product isn’t a terrible night out at the movies, and there are plenty of enjoyable elements to savor. However, Alice plays like a familiar fantasy that takes Lewis Carroll’s creatures and rearranged them into a watered-down Lord of the Rings hybrid.