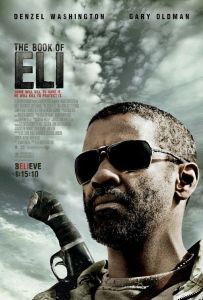 Where did the Hughes brothers go? Albert and Allen Hughes have four movies to their names, one of them a documentary about pimps, and their last flick was 2001’s From Hell. I know that Jack the Ripper thriller underperformed at the box office, starring a pre-Pirates Johnny Depp, but was it enough to throw these guys in movie jail for nine years? The Hughes brothers are talented filmmakers, first evidenced by their debut feature Menace II Society, which they wrote and directed when they were only twenty years old. I actually really liked From Hell. I get that it isn’t anywhere as complex as the source material from famous comics scribe Alan Moore, but the movie was slick, stylish, twisty and twisted and satisfying (although, Heather Graham has the worst accent in the history of movies). Where have these brothers been all this time? Nine years later, the Hughes brothers take a whack at the popular genre of the moment –Apocalyptic Cinema. The Book of Eli kind of comes across like a Hollywood version of The Road. It’s all about duplicating the look, without getting too bleak, and failing to replicate the sense of humanity in desperation. Why worry about that when you can have explosions?

It’s been 30 years since the sun scorched the Earth. Food is scarce. Gangs roam the highways. The law is a forgotten concept. Eli (Denzel Washington) is a loner heading westerly and trying to make out a meager existence. He takes the boots off a dead man, hunts emaciated cats for food, and looks for a safe shelter from the blistering sun. He struts into a dusty town looking for clean water. The town is under the rule of Carnegie (Gary Oldman), a man in search of a very specific book for his own purposes. It just so happens that Eli is in possession of this book. Eli refuses to hand over his property, speaking about his mission to transport the book to where it belongs. Carnegie sends his thugs out to kill Eli and retrieve the book. Helping Eli is Solara (Mila Kunis), a teenage prostitute who feels Eli has answers that nobody else has.

What we have here is a post-apocalyptic Western. Denzel is the lone drifter that comes into a town besieged by lawlessness or a corrupt agency of power. He even has a fight in a saloon that doubles as a whorehouse. He takes on an unlikely younger apprentice and enforces his own moral code through a series of shootouts. It just so happens that in Eli, he also has a giant machete and knows kung-fu. This is pretty strict genre stuff, mixing in apocalyptic elements for some extra flavor. The Hughes brothers give everything an ashy grimy gloss, making the most of desolate locations they shot in New Mexico (“When you need some place that looks like the end of the world, film New Mexico!”). The sparse locations and desaturated cinematography do well in establishing an unforgiving reality of the landscape.

The Hughes brothers certainly have a sense of style when it comes to the camera lens, yet they don’t approach being too self-conscious with their visuals. There’s an extended fight sequence that plays entirely in silhouette. There isn’t an overabundance of special effects in the film to clutter up the bangs and booms. There is one shootout outside a home (with Michael Gambon no less) that mimics some of the unblinking camerawork of Children of Men, swinging from side to side throughout the escalating firefight. It’s a fun visual motif that thrusts the viewer in the middle of the action. Otherwise, the action is all fairly standard stuff. It?s entertaining to watch Denzel take out a bushel of bad guys time and again, but what does that add up to with such a worn out story and half-hearted characterization? The script by Gary Whitta is heavy on apocalyptic mood and light on details. Cue more ass kicking.

Washington is stoic, almost Eastwood-like in his grit. He’s an easy antihero to root for, the reluctant avenger that manages to slice and dice his way through trouble. I won?t say this movie forces Washington to stretch his reserve of acting muscles, but it is undeniably pleasing to watch him perform his own fighting stunts. Oldman hasn’t gotten an opportunity to play a scenery-chewing villain in quite a while. Let’s face it; Evil Oldman will always overrule Good Oldman. This man was created to play sociopaths that have no ability to control the volume of their voice. This man needs a chance to bellow once every movie. Kunis proved she was a capable actress in Forgetting Sarah Marshall, but her role is fairly limited here to sidekick. She stares with her dark eyes and gets to hold a gun. That’s about it. The Hughes brothers have populated their post-apocalyptic world with familiar faces. Tom Waits is a merchant, Ray Stevenson (HBO’s Rome) as the Number One Henchman, Jennifer Beals as the blind mother to Solaris, and Gambon as a well-armed homeowner with an appetite for human flesh. That?s a good stable of actors to fill out a bunch of stock roles. It certainly makes The Book of Eli more entertaining.

The religious element doesn’t dominate the film but it does serve as food for thought. You see the book of Eli’s in high demand is actually he King James Bible (my wife bemoans the prominence of the KJ, contending it is a poor translation). But you see, this isn’t any bible wrapped in leather with a metallic locked binding (all this for a Bible?); this is the LAST BIBLE ON EARTH. That is why Carnegie craves it. In the 30 years since the vague apocalyptic event, apparently mankind rounded up all the Bibles and burnt them, perhaps to express their displeasure with God. Eli operates on the premise that Denzel has the only Bible in the known world, which just seems downright silly. My wife is in seminary studying to be a pastor, so our position may be uncommon, but we have like 15 Bibles in various languages and translations from Greek to Hebrew to English to Latin. Did people search through every habitable dwelling, every library, and every hotel drawer? There have to be hidden Bibles out there. Even in this extreme setting, it seems to strain credibility to think that mankind is left with one copy of the most widely published book in the history of the world. 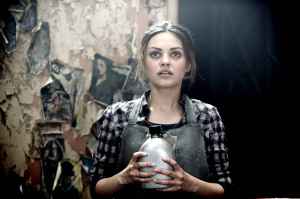 Ignoring this fact, the religious element remains nebulous even though the film chronicles the journey of the Christian text. God is referred briefly but mostly the talk steers around the ideas of “faith” and “fate” and “the right path.” Eli feels he has been chosen for a special mission, and so he trudges west with his eyes on the prize. Carnegie wants to use the Bible as a “weapon” to pervert people’s faith into giving him more power. He wants to abuse religion as a motivational force to expand the reach of his control. Here’s the thing though, Carnegie has control over a town already and rules by fear. This seems to be working fine for him. So he wants to rule by love instead, using the Bible to spread the Gospel of discipleship? It’s somewhat unclear what exactly Carnegie plans to use the text for especially considering that most of the remaining population is illiterate anyway. He could just as easily hold up any book (The Da Vinci Code is shown, why not that one? It even has “code” in the title) and proclaim it the Word of God. It’s not like these people, struggling just to eat and find water, are going to question the power structure.

Not content with being a competent genre film, The Book of Eli ends on one of those ghastly twist endings that forces you to rethink everything that came before it. It doesn’t ruin the movie, but this twist certainly leads a charge toward building a counterargument toward disproving it. I won?t get into particulars but it seems unlikely that Denzel would be as good a shot as he was if the twist holds up.

The Book of Eli has its share of thrills and some interesting visual style, but there isn’t anything here you haven?t seen in hundreds of other post-apocalyptic movies. The dusty landscapes, the biker gangs, the aviator goggles, the cryptic threats, the necessity for leather as a fashion statement. This isn’t a bad movie by any means; it’s just another entry in a cluttered genre that, with our renewed fascination of the end times, is only getting more cluttered. Washington and the assortment of actors put in fine work but it’s ultimately the story that lets them down. This is a by-the-books genre flick with a touch more style courtesy of the Hughes brothers and a touch more gravitas courtesy of Mr. Washington. My advice to the human race: stock up on Bibles. Apparently, in the post-apocalyptic future, they will be more valuable than gold. Invest now while you still can. I got 15 of them and will entertain all offers.