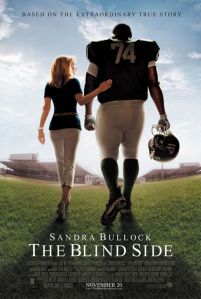 Based on a true story, The Blind Side tells the true-ish story of Michael Oher (Quinton Aaron) who was a lost, homeless black youth in Tennessee. He was adopted s a teenager by the Tuohy clan, a rich White family led by no-nonsense matriarch Leigh Anne (Sandra Bullock). Her husband (Tim McGraw) is a restaurant franchise owner, so they don’t have to worry about money or food budgets for Michael’s large appetite. The gentle giant is grateful but wary. He’s admitted into a private school because of his football potential, but at first they envision the hulking teenager on defense. Leigh Anne is the one who sees his protective instincts and assists in the switch to offensive tackle, whose job is to protect the quarterback’s blind side. With Leigh Anne’s steady influence and a stable home environment, Michael begins to feel like he has a loving family. Eventually Michael Oher becomes an All-American player in college and was drafted by the Baltimore Ravens in the first round of the 2009 NFL Draft.

The Blind Side might just sneak up and, forgive me, blindside you. Well, that?s not accurate, because this movie will not sneak up on anyone. There is not a single moment of surprise to be had. Michael Oher is portrayed as a gentle giant who is very tight-lipped. Much of his performance is in body movement and those dark, sad eyes of his, which means that the audience has to intuit a lot from the character. That might be why the most affecting moments come from Oher’s stunned, grateful reactions. It’s hard not to be affected by such an outpouring of earnestness. Stay during the end credits, watching the photos of the real family at the 2009 NFL Draft and try not to feel a smidge of their happiness.

Bullock seems like a natural fit for this character and this material, and she does give the Southern spitfire life. She’s the heart of the movie and pretty much the driving force for the film, so it helps that Bullock taps her natural charms to make the character feel less like a cartoon and more like some approximation of a person. She’s formidable and brassy and pretty much gets her way on everything. The movie has the faulty belief that Leigh Anne saying anything folksy is funny, which is not the case. However, Bullock makes the character likeable and embraceable, and plus, she doesn’t fall down once. It must be a first for a Sandra Bullock movie.

Every scene is played into a moment of uplift and eventual triumph, which can be tiring but also has a respectable batting average for success. Structurally, the movie doesn’t have any overarching sense of conflict, which seems bizarre given the circumstances of an insanely wealthy white family adopting a troubled black youth in Tennessee. You might think Michael would take some adjusting, or that the students of privilege might not fully accept someone so different, or that the Tuohy children might need more convincing to suddenly add a new member. There are a few raised eyebrows and some slight hesitation, but the characters just barrel forward like what they are doing is common. The family is just resoundingly good-hearted and full of such moral clarity, though the husband seems to be content to be a powerless pawn to his vociferous wife. There is no real internal conflict within this family despite the burdens they tackle, and even worse the movie doesn’t really show any change occurring. At a lunch with her rich girlfriends, Leigh Anne remarks that Michael is changing her life. How? She seems like the same kindly woman from the beginning. Instead, the movie is packed with tiny little conflicts that get easily resolved and then move along. Will Michael feel at home? He does. Will he get his grades up? He does. Will he figure out the game of football? He does. Will he play well in a game? He does. Will he graduate? He does. Will he get a scholarship? He does. Will he reject the lifestyle of crime? He does.

Big Mike is sidelined in his own story by the firecracker of a character that is Leigh Anne. The saintly Tuohy family is yet another example of Hollywood feeling the need to tell a compelling African-American story framed as the story of helpful, White characters. Why can’t he film’s emphasis be on Michael instead of Leigh Anne, especially since she remains the same good Christian woman from the start? It’s probably because Oher, as portrayed on film, doesn’t have much of a personality. He’s a nice if soft-spoken kid but he mostly just shuffles his feet. Off the football field, he is written merely to take up space. He serves as the ongoing results to Leigh Anne?s teaching experiments. 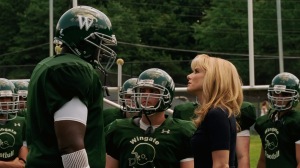 If you peel away the movie’s sentiment, it does have some niggling, potentially troubling aspects to the story. It sings the praises of insanely rich Southern Christians and makes us say, “How nice and rich of them.” Leigh Anne is the kind of woman with enough mettle to venture into the ghetto and even stand up to taunting gang members. She even threatens to shoot one of them. Every one of these “ghetto” sequences feels transparently written by somebody whose only understanding of an urban environment is from movies and TV. I wasn’t expecting The Blind Side to be as accurate as The Wire, nor would I normally care about the inaccuracy, but when it’s in the service of comparison (the comfy world of rich White people vs. the hopeless existence of poor blacks) the portrayal becomes ham-handed and morally questionable. Just to rub it in how good Michael’s got it, the movie resorts to ending with a montage of newspaper reports detailing gang slayings in Oher’s old neighborhood, highlighting every character we saw onscreen. The movie says they had no choice to end up as criminals because they could not escape the nightmares of the ghetto. If only those unfortunate black youths could have found rich families to adopt them.

The Blind Side is a straight-down-the-middle genre picture that plays every expected note, it?s manipulative and formulaic for a sports drama, but I’d be lying if it didn’t get to me from time to time. If you go into The Blind Side under the right frame of mind, which means essentially ignoring the flagrant manipulations, then this movie will work on its sentimental sports genre sensibilities.