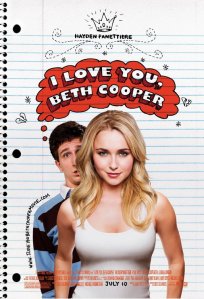 Not the trainwreck it’s been advertised as but still not near the term of “passable,” I Love You, Beth Cooper feels like a forgotten relic from a time capsule of 1980s teen movies. It just feels so powerfully dated and yet unable when to maintain a consistent comedic tone or building interesting characters. During the valedictorian’s (Paul Rust) graduation speech, he loses his filter, lets people know his real thoughts, and Beth Cooper (Hayden Panettiere) gets the titular declaration. Thanks to director Christopher Columbus, the movie wallows in shallow stereotypes; geek goes after head cheerleader. The comedy is ramped-up slapstick that approaches cartoon ridiculousness, including Beth’s ex-boyfriend who assaults and destroys everything in sight without anyone ever calling the police. There are some ham-handed life lessons doled out between the PG-13 randiness. The casting also dooms the flick. Panettiere isn’t a strong actress, and as for Rust, I was irritated by the character’s every movement and word. There are some fun stretches but nothing that ever sticks or resonates. I Love You, Beth Cooper is not worth adulation or scorn, just indifference.