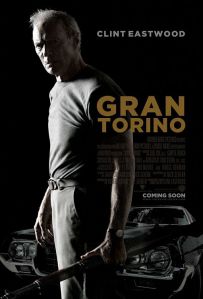 Clint Eastwood is an icon but he’s also proven to be a remarkable and thoughtful director in his twilight years. When the star first traveled behind the camera he mostly stuck with the action films that were his cinematic bread and butter. Then he showed something grander with 1992’s Unforgiven and rebounded back to that quality with a string of critically lauded flicks like Mystic River, Million Dollar Baby, Flags of our Fathers, and Letters from Iwo Jima. Three of those films were nominated for Best Picture, including three Best Director noms, and Baby won. The prolific screen icon has taken his directing skills up to another level in his older age and Eastwood has chosen to work on somber, mature, and meditative tales. Gran Torino is a movie caught between two different eras of Eastwood direction. It has the sheen and intentions of one of the recent loftier works and the film also taps into the suspense of his earlier action vehicles. It’s the only non-Batman movie targeted for Oscars this year that features ass kicking.

Walt Kowalski (Eastwood) is a retired Korean War veteran living in Detroit. He worked on the Ford factory lines for over 30 years and now has the pleasure of seeing his spoiled children driving foreign cars. His neighborhood has been inundated with Hmong immigrants from South East Asia. It seems the Hmong people sided with the Americans during the Vietnam War, and when the Americans left, well, it didn’t turn out so well for them. One old Hmong lady chastises Walt as a stupid old man and doesn’t know why he hasn’t fled like the other whites that used to live in the neighborhood. Things aren’t like they used to be. Gangs run rampant and terrorize the people into silence. We’re told that when it comes to the Hmong, the women go to college and the men go to jail. A Hmong gang keeps trying to recruit Tao (Bee Vang) into their ranks. He is looked down upon as a weakling and for doing women’s work, like gardening and the dishes. His initiation into the gang is to steal Walt’s pristine 1972 Gran Torino, the old man’s prized possession and one he helped build on the assembly line. Walt catches Tao in the act and eventually the boy works for Walt to repay the offense. Together, Walt and Tao form an unlikely bond. His Hmong neighbors cherish Walt for saving Tao from the gangs and the community opens its arms to him. Walt helps Tao find a job and stand up for himself, but the pull of the gangs is too strong. Walt realizes that Tao and his bright sister Sue (Ahney Her) will never be allowed to have a future as long as the Hmong gang is around. 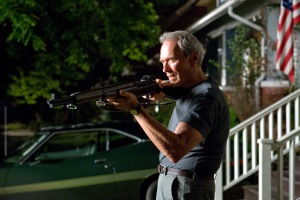 It’s hard to take the movie purely on the surface without some preparation. Because in synopsis, Gran Torino sounds like a ham-fisted after school special where Old Man Dirty Harry teaches the youngsters about the dangers of gangs and violence. The film is hard to fully describe without it sounding like a parody. Yet Gran Torino manages to come together along the journey. The movie balances gracefully even when it seems like it is going to dip into self-parody. Simply put, having Eastwood point a gun and growl, “Get off my lawn,” the quintessential geezer line, is almost calling out for ridicule. The gang storyline feels at times incredibly natural in approach and its casual, realistic dialogue, and at other times the storyline, like the film, feels like it is leading you by the nose. Some of the stock characters are sketched so thin, like the self-centered granddaughter who wears a midriff-bearing outfit to her grandmother’s funeral (all the better to witness your navel piercing, my dear). The spoiled children and grandchildren come across as too broad to be believable. The messages are all familiar, the characters are even somewhat familiar, but Gran Torino emerges as something more understated and perceptive than “Archie Bunker with a gun.” It’s a moderately rich character piece that follows one man resorting to his better nature in his golden years. Walt’s redemption may be predictable from the first minute but that doesn’t make Gran Torino any less satisfying. In fact, the movie on a whole is an embarrassingly entertaining experience. Sure, there’s a certain primal rah-rah vengeance angle to it, and watching a 78-year-old man kick around some youngster is always worth watching. But the novelty of the movie is not cheap xenophobic wish fulfillment, watching an old white war vet eliminate the immigrants in his neighborhood. The draw of this movie is an old-fashioned tale told well, which is equally earnest and glum.

The dialogue can be forcibly blunt as it spits out every offensive racial epithet, slur, and stereotype known to human ears (it’s practically the comedy routine of the unfunny Carlos Mencia). The screenplay by Nick Schenk confuses racist pabulum with comedy gold, like hearing an old lady cuss, but Eastwood manages to make it work. The rampant racist dialogue tends to get tiresome unless it begins to chip away and reveal more about a character. Naturally, Walt shuns being politically correct because he is uncompromising. He shakes his head and glowers at what the kids today have turned into. He’s meant to make others feel the same discomfort he feels in today’s world, and words are his weapons at his old age. The backbone of the script is the friendship Walt forms with Tao and his family. Because it begins so reluctantly and moves at a steady pace, the audience is emotionally invested and the friendship is rewarding to witness. The movie presents a fairly universal message about the redemptive power of human kindness, of helping one’s neighbor. It’s a petty big melting pot out there and there’s no reason to dig in and combat change. Gran Torino lacks the forced sanctimony and transparent manipulation of other “important” race-relations movies, like 2005’s Best Picture-winning Crash. 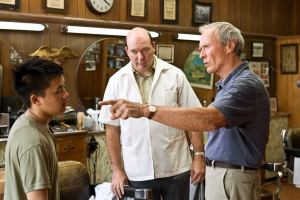 The movie is impossible to view without it also becoming a commentary on an iconic actor’s screen legacy. What does a retired Dirty Harry at 80 look like? I imagine something like Walt, an embittered war vet grumbling about the change all around him that he is powerless to ignore. Eastwood takes great pains to be an angry curmudgeon even until the end, which allows the actor to tap his little seen comic ability. There’s a funny scene where Walt takes Tao to the barbershop for a lesson in how to “talk like a man,” which naturally involves playfully insulting your fellow man. Eastwood knows how to make a racist and standoffish character sympathetic and engaging. It’s a pleasure watching Walt become affectionate and protective, and yet the character’s redemption doesn’t ever feel contrived. His character is scarred and weary and wears his pants up to his armpits, but Clint makes it work. He can be sad and badass and appalling all at the same time. The character is somewhat similar to his character in Million Dollar Baby, a grumpy man closed off to the world who mentors a young kid. The flick presents a semi-dignified swan song to what happens when men of action grow old.

Eastwood directs with his typical steady hand and cool decision-making. The camerawork is intimate and sparing, never yanking the audience out of the story. The visuals mimic the characters in that nothing feels over polished. I enjoyed the small bits that pointed to something deeper, like Walt pointing his finger, a pistol and lining up his antagonists. I also enjoyed that Walt refrains from ever spilling his guts about his guilt during the Korean War except in a way that feels true to the character. Eastwood also shows a bit of his directorial prowess by hiring a bunch of Hmong actors that have had no acting experience. Some of them fare better than others, and some are in fact kind of bad, but this decision makes the movie feel more authentic. Now, it’s rare for me to cite sketchy acting as a plus for a movie, and that should be a testament to Eastwood’s directing skills. The man has a way with people; since 2003 he’s directed four different actors to Oscars. It must have been what Angelina Jolie was hoping for when she signed up for Changeling, the earlier Eastwood directorial effort from the fall. I think the biggest mistake Eastwood makes as a director is singing the closing song that unrolls right before the credits. Clint’s raspy singing voice is not the best way to close a movie. 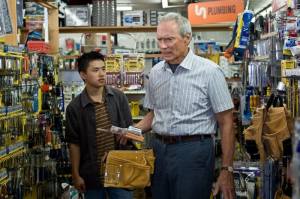 Gran Torino isn’t among the same ranks as Eastwood’s other output, like Letters from Iwo Jima or Mystic River, but it’s a small-scale story told with fortitude. Even as I write this review, and you dear reader read them, I feel like I’m failing in my attempt to make the movie sound good. True, on the surface it sounds like a bizarre after school special that would be destined to slip into self-parody and open mockery. Eastwood as star and director makes the material click. Walt’s journey from grumpy bigot to grumpy bigot who has opened up and made amends is greatly entertaining and humorous throughout. Gran Torino can be seen as a deconstructionist take on the fading era of Dirty Harry and Eastwood’s cinematic tough-guy legacy. Clint fans will eat all of this up.