Al Gore is possibly the least likely movie star in the history of movies. The former Vice President and 2000 presidential candidate has been making the scene with An Inconvenient Truth, a potent documentary warning about the impending perils of global warming. Gore has traveled all over the globe giving a well-honed Power Point presentation on the topic. An Inconvenient Truth is a 90-minute big screen version of this presentation. Consider it more concert film than documentary. An Inconvenient Truth is equal parts spellbinding and terrifying. Best of all, it’s that rare film that could quite honestly change the world for the better.

This is like sitting through an impassioned lecture by your favorite college professor. Gore smartly turns the issue of global warming from a political issue to a moral issue and asks how can we let this happen to our planet. He delivers a highly persuasive science show that should shake everyday Americans out of complacency and galvanize them to action. But what’s best about An Inconvenient Truth is that it doesn’t crush you to death with data. Gore explains the perils of climate change in general, easily graspable terms and uses choice pictures to service his message. It’s downright startling to see photos of glaciers and lakes that have gone dry in such a short span of time. As the film continues, Gore gains momentum and the facts, graphs, and charts multiply, and you’ll be hungry for even more. An Inconvenient Truth is a great learning tool because it really whets your appetite for knowledge and follows through on its convictions. Gore climbs an elevated lift to illustrate on a chart where carbon dioxide emissions will be heading. The moment is both grand theater and a stupendously straightforward visual demonstration that there will be far, far, faaaaaar greater carbon dioxide emissions in the near future than there has even been in 650,000 years.

Gone is the hectoring, emotionless Al Gore that people seem to recall from his political days. An Inconvenient Truth displays a Gore rich with humor, command, and most surprising of all, guile and charm. Old Gore might have harrumphed at his critics and come across like a walking stiff, stick firmly entrenched in rear. The Gore on display here seems candid, spirited, and easily engaging, plus he never comes across as preachy. It helps when he’s presenting on a topic he’s devoted much of his life to being a cheerleader for. Nevertheless, he’s a disarming speaker and it’s easier to swallow his spoonfuls of science when he’s turning on the charm.

Gore presents an overwhelming case for the existence of steady global climate change. But why then is there still much hand wringing about whether scientists can even agree? An Inconvenient Truth seems to have the answer. We see a ten percent sample, around 900 peer-edited scientific reports, concerning the topic of global warming. Not one of the 900 reports concluded that the proof of global warming was inconclusive. However, we then see that over 50 percent of all media reports mentioning global warming cite scientific wavering, saying the jury’s still out in the scientific community when it is anything but. Perhaps this is why people still see global warming as inauthentic hippie alarmism. Gore tackles his critics and presents very levelheaded reasoning. You can tell this man believes strongly and genuinely in the topic.

Let me put aside my film critic hat, if I may for one moment. I am getting fed up with how flippantly people dismiss science when it conflicts with their own belief system or agenda. There was a time when people looked at scientific findings and accepted them, saw their extensive testing and recalculating, and chalked it up to truth. Nowadays we have people trying to define their own versions of science, whether it be a new opening to slip religion into a classroom (Intelligent Design), a new way to control behavior (suppressing FDA-approved birth control studies), or simply a way of turning back time and civil rights (erroneous abstinence only sex ed). This stuff really irritates me. Let’s trust the science to the scientists, not Pat Robertson when he says he knows condoms are unreliable. When I get a cold I don’t consult my pastor, do you? That’s why I too am frustrated by what Al Gore sees. There’s a cabal of special interests trying to turn the issue of global warming from fact to theory, and in the process delaying serious response because it affects their cash flow. Okay, rant completed.

The science side of the equation is open and shut. Global warming is taking place but what can we do about it? We learn in the movie that the United States is the biggest polluter in the world. Thankfully, An Inconvenient Truth actually suggests ways of cutting down on energy that the average American can do. The end credits are full of helpful do-good aphorisms and suggestions to combat climate change. One of those suggestions just happens to be telling your friends to see An Inconvenient Truth. Surely the makers of this film get nothing out of that option. 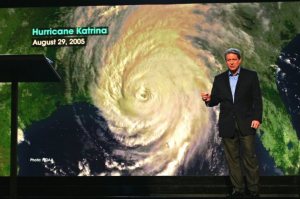 Less effective are the minor asides the film takes to look into Al Gore’s personal and political past. The point I suppose is to show how we can turn personal tragedy or setbacks into a rallying point to save the planet. I don’t really know. These segments clog up the engrossing horror story Gore is dictating. I don’t want to learn about Gore’s tobacco farming family or how he handled losing the 2000 presidential election, I want to get back to the doom, the gloom, the graphs, and the pictures! It’s the equivalent of listening to a grand ghost story by camp light and having the storyteller occasionally stopping to mention they once caught an eight-pound bass. Get back to the good stuff already.

You don’t have to agree with Gore’s politics or even like him to be strongly affected by An Inconvenient Truth. As a film, it’s little more than a bigger stage for Gore’s patented, visually friendly slideshow, but as a message movie its aim is true and striking. Gore lets the science speak for itself and to that end the case seems closed. Global warming is happening, despite what media reports, skeptical business big wigs, and energy polluters might say. It’s saying something about the reach and importance of a documentary when actual oil companies are releasing smear commercials to discredit its message. Gore’s impassioned science lecture is fascinating, incredibly informative, and easy on the eyes with lots of stark pictorial examples. Al Gore is right; global warming is too big to be deemed a matter of political right and wrong. It demands attention and action, and An Inconvenient Truth demands to be seen; it’s not the best movie of 2006 but it’s certainly the most important.