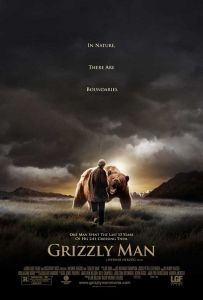 Werner Herzog goes through hundreds of hours of the late Timothy Treadwell’s own footage of himself living amongst Alaskan grizzly bears. He lived every summer with the bears, his “friends,” for 13 years, until one bear killed him and his girlfriend (the deadly altercation’s audio was captured, though Herzog never plays it in the film). Treadwell was retreating from a human society and putting animals on equal pillars as human being, even predators he treated as “men in bear suits.” Treadwell never references his girlfriend, who can only be seen barely once or twice in his hours of footage. That would destroy his fantasy that he’s out there alone, living it up with these creatures. Grizzly Man is an absorbing character study into the working of a very troubled man. It’s interesting how he uses the camera an audience and means of catharsis. He bounces from point to point, brought to tears a bumblebee died mid-flight on a flower. He does different takes of his own nature footage. Herzog presents an altogether different point of view about nature, more cold and survival of the fittest and less cuddly. He brings a critical analysis to Treadwell’s idealized platitudes. The bears Treadwell was spending time with were on protected land, so there really wasn’t much need for his activism. He definitely had a martyr complex going. This critical perspective gives Grizzly Man depth, dueling views of nature playing it out in the documentary form. Weirdly, it seems like a lot of the interviewees in Grizzly Man treated their moments like they were auditioning for Hollywood. This would be a really interesting double feature with March of the Penguins. Treadwell wished for death because his cause would be even greater. Now there’s a movie that will reach millions. Be careful what you wish for.