A funny thing happened to me when I sat in a theater to see Closer. It was packed, surely due to the film’s heavy star power. As the film played out I began to notice that my audience was laughing consistently, at moments that weren’t necessarily meant for humor. I don’t think they were laughing at the film, instead I think it was a defense. You see, I’m sure the majority of those couples read Closer to be a much different film than it is. They saw the pretty faces of Jude Law, Natalie Portman, and America’s sweetheart Julia Roberts. They were expecting something, let’s say, lighter than the cruel savagery of Closer. When America’s sweetheart Julia Roberts compares the taste of two men’s semen, you know this isn’t any Gary Marshall movie (forgetting Exit to Eden, and please do).

Dan (Jude Law) is an obituary writer planning to pen a novel one of these days. He locks his eyes on Alice (Natalie Portman), a stripper from the States, while walking one day. She gets hit by a car and Dan takes her to a hospital. Flash forward and Dan and Alice are dating but his eyes are already wandering. During a photography session with Anna (Julia Roberts) he kisses her but is spurned. He takes his revenge on some soul in cyberspace, pretending to be Anna and arranging a meeting. That sap turns out to be Larry (Clive Owen), and they actually do start dating. Then things get messy. Couples leave one another, get back together, swap lovers, and come crawling and begging for forgiveness or punishment. The rest of Closer is like a long game of relationship Red Rover.

Director Mike Nichols has a definite affinity for his four actors (they are the only ones in the film with speaking parts). He shoots Closer as an actor’s showcase, with constant close-ups and no handheld camerawork. He places the emphasis on his actors. The results are more familiar to Nichols’ early films like Who’s Afraid of Virginia Woolf? and Carnal Knowledge. However, Closer isn’t as insightful as it thinks it is. It presents cruel characters doing dastardly acts, but this is stuff that wouldn’t impress Neil LaBute (In the Company of Men). There is intelligence to the film?s dialogue but it’s wasted on a ramshackle story.

The acting of Closer both helps and hurts the film. It seems that the two primarily wronged characters (Larry, Alice) give the better performances.

Owen is the standout performer of the ensemble. Playing the Dan role onstage has given him an intimate feel for the story’s characters. He’s the most decent of all four until the weight of circumstances finally pushes him to the limit. He’s the character the audience sees themselves in, so it helps that Owen gives a great performance of quiet dignity and slow self-destruction. He expresses more emotional turmoil in his eyes than most actors do with their whole body. Portman is having a breakthrough year for herself. First she showed pluck and grace in Garden State, and now with Closer she has graduated to the adult table. She radiates a fragility that makes you want to hug her. Portman will probably always look like a little doll (which works for her role as a stripper).

The beauty of Roberts and Law hurts the ugliness of their characters. I make no bones about my general dislike of Roberts as an actress. Her acting in Closer is like a soft-spoken, pouty child. She jumps from man to man, looking sullen or pensive, but comes off more petulant. Law is better, but his handsome devil is not in the details. Dan is a womanizing cad but we never get any understanding for why he acts as he does. Law can be hypnotizing, but like Roberts, his pretty facade takes away from the impact of Dan’s ugly behavior. 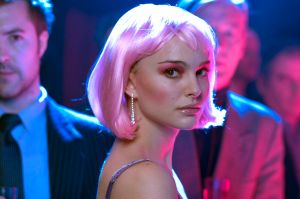 Despite the title, you get no closer to getting to know or understand the characters. It’s really almost a stretch to call them characters because they’re more accurately different positions in an argument. The only characterization Closer has to offer is suffering and inflicting suffering. Closer really has one voice coming out of the mouths of different pretty actors.

The film has the annoying habit of skipping ahead in time and not telling the audience. We’re left to catch verbal asides that time has passed. After a while you’ll get the hang of it simply by assuming that the beginning of every new scene is the start of a new date in time. Closer is nothing but a string of uncollected scenes, usually involving people leaving a lover or starting a new fling. The actors come on, do their part, then they leave and we move on to a different scene. This is not staged as a movie.

The trouble with Closer is that it never really feels like it’s going anywhere. There’s no progression. Sure, couples swap, people get revenge, but the connection of sequences is lacking. The way it is, Closer could have gone on forever. It’s a series of scenes smashed together, not a story that rises and falls and builds to a climax.

Closer is an exploration into the darkness of human behavior starring some of the prettiest actors Hollywood can spare. The story goes nowhere, the ending doesn’t accomplish much, the characters lack convincing depth, but some of the acting is good and there is a ray of intelligence to the film. Fans of the above-the-title actors should enter Closer with caution. It’s a dark film with little to feel good about. Closer is brooding, moody, and probably the first and last time we?ll hear Julia Roberts talk about the taste of semen. Unless, of course, Gary Marshall starts pre-production on Exit to Eden 2: Rosie O’Donnell’s Bondage Boogaloo.