I really don’t think a lot of people know Bobby Darren. It seems that today most people would recognize him from singing “Beyond the Sea” over the closing credits of Finding Nemo. He wasn’t supposed to live past 17 but went on and wrote 400 plus songs including “Mack the Knife,” “Splish Splash,” and “Dream Lover.” Seems like there could be some interesting ground for a biopic. Kevin Spacey is one of our most celebrated actors and earned two very well deserved Oscars. Spacey has a strong passion for Darren and has been dreaming of portraying his life story for years. Passion is good for a role, right? Sam Raimi had passion for Spider-Man and look how those movies turned out. Well, with Beyond the Sea it seems that Spacey is less passionate about Bobby Darren and more passionate about his love of Kevin Spacey.

The film opens with the 37-year-old Darren (Spacey) reliving his life via a biographical movie he’s filming (yes, it’s a movie-within-a-movie). With the help of a younger movie self as a guide, Darren traces his rise from the streets of Brooklyn to headlining the Cococabana club. As a young child, doctors feared that Darren wouldn’t outlive his teens with his weak heart. Bedridden often, he found inspiration in music with his flamboyant yet supportive mother (Brenda Blethyn). Darren is driven to succeed and soon lands on top of the charts with a string of hits. Next he?s starring in movies with Rock Hudson and Sandra Dee (Kate Bosworth), a chickadee that Darren is just as determined to succeed with. They marry, have a child, but Darren doesn’t feel fulfilled. He needs to push his music further whether or not it alienates everyone around him.

If you thought Beyond the Sea was the story of Bobby Darren, you’d be pitifully wrong. It’s really the story of Kevin Spacey, actor/writer/director/singer/dancer. That’s why we get to see flashy, superfluous dance numbers, that’s why we get to watch Spacey sing 12-15 times, and that’s why Spacey went to the trouble of re-recording all of Darren’s songs so that?s it?s Spacey belting out the tunes. Because, remember, this is a film about Spacey, not Bobby Darren.

Spacey is also much too old to be playing Darren, who died suddenly at age 37. He comes off lechery, especially during his courtship with the young Sandra Dee. Spacey isn’t unaware of this problem because in the opening minutes of Beyond the Sea someone accuses Bobby Darren of being to old to play himself in his movie. The response: “He was born to play this part!” There you go folks, case closed.

The acting in Beyond the Sea isn’t really an issue. Spacey has a genuine bounce to his song renditions and proves to be a capable dancer. John Goodman plays yet another gruff but lovable sidekick. It’s always good to see Bob Hoskins onscreen, no matter what the role may be. Bosworth comes away the best as she shifts from stars-in-the-eyes naiveté to a harder edge (you may rethink that whole song from Grease).

The dialogue is played so straight that it’s often hilarious: “Memories are like moonbeams, we do with them what we like.” With all due respect, what the hell does that mean?! I think I get the idea but what can anyone really do with moonbeams? If this line isn’t bad enough it becomes a central idea for Beyond the Sea which Spacey/Darren uses to excuse his flagrant gaps in time and fact.

Beyond the Sea gets so caught up in the Kevin Spacey Variety Hour that it fails to tell its audience why they should even care about Darren. Was he an inspiration because he outlived doctor expectations? Did he liven up old songs? Was he a remarkably versatile talent? Who knows? You’re on your own. Spacey’s too busy singing and dancing to explain the relevancy of Bobby Darren or why this movie should even exist.

There must be some interesting facts about Darren. I did not know that he wrote “Splish Splash” let alone that he wrote the whole song in 20 minutes. I didn’t know Darren required a toupee at such a young age. That stuff is interesting. It’s too bad it all takes a back seat because Spacey wants to emphasize his singing. Seriously, I get it; you can sing, Kevin Spacey. Can I see more of Bobby Darren and less of Spacey now? 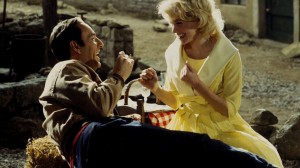 Beyond the Sea portrays Darren so single-mindedly. He’s always focused on his music and nothing else, whether that be a budding acting career (he was nominated for an Oscar), the advice of his friends, or the love of his family. Darren kind of comes across as a self-centered jerk a lot of the time in Beyond the Sea.

I don’t know which is worse, Spacey the director or Spacey the writer. It’s not that he’s inept at either end but he just makes decisions that kill the material. There has to be a better framing device than having Darren star in a movie about his life. There have to be better transitional ideas than having New York City explode into choreographed dances. To top it off, when the movie reaches its very protracted climax, we see the adult Bobby Darren in a tap duet with his younger self. Beyond the Sea loses whatever earnest intentions it had and melts away into one strange metaphysical song and dance revue.

Beyond the Sea has been a pet project for Kevin Spacey for so long that the focus has shifted from Bobby Darren to Spacey himself. This movie exists so that Spacey can celebrate himself. To say Beyond the Sea is a showcase of megalomania would be an understatement. Many scenes exist for no reason other than to give Spacey another opportunity to dance or sing. Re-dubbing all of Darrens songs seems a tad unnecessary and a whole lot about ego. Die-hard fans of Darren or Spacey may enjoy Beyond the Sea, but most people will grow tired of seeing Spacey congratulate himself for being an autuer. This is a self-indulgent nightclub act posing as a film. Memories are like moonbeams, and I’m forgetting this movie as fast as possible.