What a summer it has been for independent films. This summers most talked about movie wasn’t Spider-Man 2; no, it was Michael Moore’s Fahrenheit 9/11. This summer’s greatest triumphant underdog wasn’t Shrek; no, it was Napoleon Dynamite. And this summers scariest movie wasn’t The Village or the Exorcist prequel; no, it was Catwoman. A fine runner-up, though, is the 2004 Sundance smash, Open Water.

Susan and Daniel (Blanchard Ryan and Daniel Travis) are a couple vacationing in the islands. They sign up for a scuba diving voyage, but due to a counting error by the boats crew, are left stranded in the middle of the ocean. Susan and Daniel at first seem nonplussed, but as the hours wear down they begin to question how they’ll ever be rescued. Panic really starts to set in as they realize they have no control over where the current decides to take them. They turn to each other for support but that also doesn’t pan out. Sharks pop up here and there and Daniel tries to use what he learned on Shark Week to asses their danger. As the hours pass, and dehydration sets in, the sharks become more numerous, and Susan and Daniels’ fears become overpowering.

Writer/director/editor Chris Kentis creates a solid, tightly wound mood. His film was shot on a shoestring budget and sometimes it shows in the picture quality. He knows how to effectively draw out a scene and cut it to build tension. The plot could have been written on a napkin, and the characters are somewhat bland, but that doesn’t stop Kentis from masterfully drawing us in and making us care. Open Water is only 79 minutes long, and about 10 of that is the opening vacation footage, but Kentis makes the most of his time. 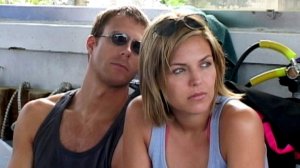 The acting by the two relative unknowns is passably good. Ryan and Travis never trip up and become actors wading in water; they feel like real people. This is a testament to the writing and proximity to actual sharks, but Ryan and Travis should also be credited for keeping the illusion together. Early in the film, Ryan also bares all in a surprising full-frontal nude scene that I doubt few going to see Open Water ever heard a whiff about. I guess when you go on talk shows and all they ask you is, ”What was it like being around real sharks?”

One of the reasons that Open Water is so effective is how realistic it is. The film is based on a true incident at the Great Barrier Reef in the 90s. A scuba-diving couple was left behind by their tour boat and eventually died of thirst days later. Their bodies washed ashore. Now, slowly dying of thirst wont exactly ratchet up the terror, so one must forgive the inclusion of dangerous sea life this film brings to the table.

Open Water succeeds in creating a taut atmosphere. The greatest trick to establish tension in thrillers or horror films is to make the audience afraid of what they dont see. To a lesser extent, The Blair Witch Project tried this with rocks, stick figures, and an anticlimactic sit-in-the-corner ending. Open Water will succeed where Blair Witch failed for some (like me) because the fear of the unknown involves ferocious animals that can rip you apart, that are always just below the surface. Once a character starts openly bleeding, we dread the gruesome inevitability. That’s a whole lot scarier than rocks.

I do not get scared by movies easily. When a jump scare occurs onscreen, and I can see the audience leap in waves, it registers nothing with me. Perhaps my body has just grown to predict them and register them as nothing special. I mean, can you remember one jump scare from a scary movie (the bus in Final Destination notwithstanding)? Jump scares are lame. Open Water, however, builds tension effortlessly. Your fear simmers the longer the couple bobs in the water. As time passes by, and they drift further and their chances of rescue diminish, the more helpless things become. When sharks begin to circle the couple, our fear is starting to strangle us. There’s a fantastic moment late in the film set at night. The screen is pitch black except for the occasional glimpse afforded by strikes of lightening. This is a film that really makes you uneasy and stays with you long after you shuffle out of the theater to your land-locked home.

Open Water‘s two leads have a certain blandness to them, but instead of being a detriment, this allows the audience to easily place themselves inside the characters. We become involved because we see ourselves and our own harried reactions. The dialogue in Open Water also feels 100% authentic to the situation. The characters stick to tired optimism, trade in gallows humor, discuss what they know about sharks and sea life, and eventually bat blame around for being in this incredible situation. Nothing about the way these characters speak feels ironic, or snappy, or fake. The characters feel real, their dialogue feels real, and the danger feels very real.

Open Water is a minimal, suspenseful, smart, and scary exercise in reality. Some people will be bored by the plot, complaining of endless scenes of people bobbing around the ocean and the series of climactic near misses. Fans of mainstream horror may not feel compelled by the minimal efforts of Open Water. However, for those out there who like scary films they can place themselves inside, Open Water is a low-budget chiller that will get under your skin. Think of it as The Blair Witch Project with sharks . . . but good.