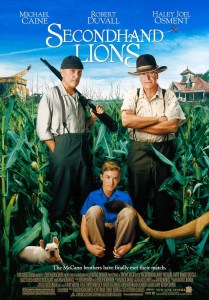 Walter (Haley Joel Osment) is being shipped off by his absent-minded mother (Kyra Sedgwick) to spend the summer with his two great uncles (Michael Caine and Robert Duvall). His mother is secretly hoping that Walter will cozy up to his eccentric relatives because of rumors that they have stockpiled millions of dollars. She sends Walter off with a mission to find the location of that money. Walter is a weenie, and Caine and Duvall are mans men that can still show them cocksure youngins a thing or two. The summer passes and Walter learns more than he could have ever known about his uncles and their supposedly amazing lives.

Caine and Duvall, two of the best actors we have, are wasted with material that pushes them into grizzled ole curmudgeons that inevitably soften up. Duvall plays the same rough and tumble character he plays in so many better movies, and Caine just seems like hes bored. Osment loses some cuteness as he hits puberty. He still has the face of a teddy bear (really look sometime) but Im sure hell rebound and it’ll only be a matter of time before he’s dating one of the Olsen twins. Wow, this is weird for me to write about.

The film feels like its in the hands of a novice with no confidence. The director (whose only other experience was a film called, [Dancer,Texas Pop. 81) doesn’t seem to know of anything reaching subtlety. The storyline with Osment’s flighty mother is just painful to watch. She’s an embarrassment of a character. Scenes are awkwardly framed and there are way too many fun montages of Caine and Duvall shooting things endlessly. I don’t know about your movie lore, but when I see old men firing at people from their porch, this doesn’t register as crazy yet lovable old timer but only as crazy. The entire lion subplot is just silly. The film even gets worse as it spins into a fantastical epilogue that stretches the bounds of reality. You’ll know it when the helicopter touches down. 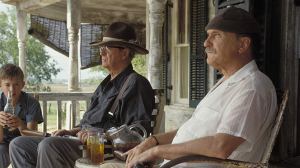 Some elements of Secondhand Lions work despite themselves. Theres an ongoing subplot where Caine spins a great yarn about him and Duvall’s adventures as young men in the French Foreign Legion. We cut to some B-movie inserts that provide some fun, despite a preponderance of sword swinging violence that may question the family label people are too freely applying to Secondhand Lions. Watching this tall tale was far more entertaining than the reality Secondhand Lions[ was trying to dish. I kept wanting the film to somehow invert, and then this film would be the B-movie adventures where some person is telling a story about a whiny kid who gets an old lion and learns a thing or two about life and being a man from his two crazy uncles. Do you see what Im getting at.

Secondhand Lions is an overly sentimental Hallmark card of a movie. I dont think I’ve yawned this much during a movie in a long time. Secondhand Lions is an uninspired trick pony trying to appear like a wise coming of age nostalgic tale. Instead, the entire film feels secondhand. Beware, contents may have shifted upon delivery. Mark this box return to sender. Okay, I’m done with the postal puns.