The field of super spellers heading to Washington D.C. is more varied than you could possibly imagine. What is truly amazing, and equally heart-rending, are the scenes showing working-class families encourage their children to excellence. Angelas parents fled Mexico to give a better life for their family in Texas. Her father has been a rancher for 30 years and does not speak a word of English. Its incredible to see the amount of pride her parents have when they see her compete. She says she’s doing it for them. Ashley lives in the projects outside of Washington D.C. She exudes confidence as she makes long treks from school to the cramp apartment her family lives in. Her mother had never expected her child, from her background, to compete for spelling contests but becomes her biggest and most vocal cheerleader.

Spellbound also shows the fanatical level of commitment some of these kids have. Neils father pushes his son to the extremes and the two go over 4,000-8,000 words a day. Neils parents even hire a spelling coach and he gets instruction from his schools foreign language teachers on the history and spelling of foreign words. The commitment most of these kids show is jaw-dropping and obsessive. Ted is the exact opposite. Hes so nonchalant about the spelling bees that it almost seems like hes battling complacency in his small town. His younger brother has the films best line: “It was so exciting. If I had blood pressure it would be through the roof!” 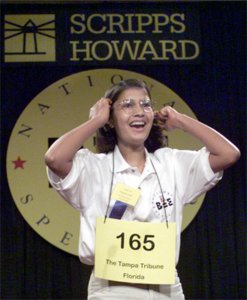 My favorite speller is April. She and her parents live in a dying town. Her father worked in a asbestos factory until it was shut down. He now operates a tavern across from the decaying factory. The family struggles to get by but has so much visible love for their daughter, so much undying support for April. I saw April’s parents as the type you might be embarrassed to say something weird to your friends (“Mom, you are so out of it, geez.”) but the same type that you secretly thank everyday you have. April declares herself a pessimist and doubts the distance she’ll go in the national bee. This is the kind of instantly likeable and compelling character Hollywood has forgotten how to create.

With Spellbound we get to know our hopefuls so well that were saddened before the national bee even begin because, at best, only one of them will win. And, as corny as it sounds, they are all exemplary examples of winners.

Spellbound is the most thrilling movie I’ve seen in ages, totally walloping the heady pretensions of certain action movies. This film will make your palms sweat and then some. Your heart races wildly when it isn’t in your throat. Several films like The Sweet Hereafter or American History X have brought me to tears through their adept expressions of sadness; Spellbound may be the first film thats ever brought me to tears (about five times) just for pure vicarious happiness and joy. To see these kids achieve will, and I know this is so cheesy and blurb-y, but it will make your spirit soar and want to cheer. I’ve since watched the film several times on DVD, and I must report how surprised I am that I end up crying every time, though at different spots. This is a joyous movie, pure and simple.

Spellbound is an uplifting movie for everyone that is guaranteed to have some lasting, triumphant resonance. If you cant feel for these kids I suggest you check if your heart is defective. This is a great example of what film can do, what the American dream can mean for people, and the great diversity an academic competition can inspire. Spellbound is thrilling, heartwarming, and sunnily satisfying. You’ll fall in love with these kids and their hopes and dreams.