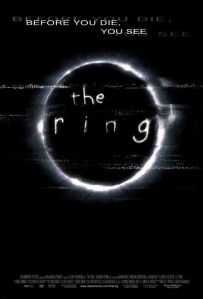 So have you heard the one about the videotape where you die seven days after you watch it? No it isn’t a new late fee ploy by Blockbuster. It’s the great premise for the entertaining new horror movie The Ring. After you watch this eerie video your phone rings. A raspy voice on the other end tells you that you have seven days, then, one week later to the minute, you die. How cool is that?

Seattle reporter Rachel Keller (Naomi Watts) learns of this urban legend at the funeral of her teenage niece, who died suddenly and mysteriously. Through research she observes that her niece’s three friends all died at the same hour on the same day, though through different circumstances. She recovers pictures of the four of them at a campsite, where they had watched the video, except their faces are blurred in pictures taken after they had watched the tape.

The Ring has its shares of creepy scares but midway in it makes an unexpected turn. Rachel, being the good journalist she is, goes to the camp and pops in the dreaded videotape. She watches it and makes us watch it too! Afterwards, working against the death clock here, she tries piecing together clues left on in the tape’s grisly and stark images to solve the mystery of who is behind it. It’s at this moment that The Ring turns into an extended beyond-the-grave episode of Law & Order.

As with most mysteries, the intrigue and questions are more interesting than the eventual answers. As Rachel’s investigation picks up steam we start to lose interest. Of course it wouldn’t be a supernatural thriller these days without a Sixth Sense-like twerpy kid. This one features Rachel’s son (who looks like the lost Culkin child) who has premonitions of death.

Watts, who wowed critics with her breakout role as the good girl/bad girl in Mullholland Drive, is luminescent as a leading lady. Watts can deliver parts passion, fright, curiosity and concern without blinking an eyelash. She is an exciting actress to see develop.

The Ring is directed with a vibrant sense of foreboding by Gore Verbinski (The Mexican). He delivers some definite cover-your-eyes moments but also creates a wonderful atmosphere of fear throughout with illuminating visuals. There is an absence of gore and any real violence, just an emphasis on intense atmosphere like what the classic horror films would achieve.

The scares that The Ring can conjure are genuine and the film has a nightmarish undertone to it. This Hollywood remake of the Japanese cult classic can stand on its own legs with confidence, even with an overextended ending that you may require initiating another person to explain to you. So, anyone want to watch a killer movie?