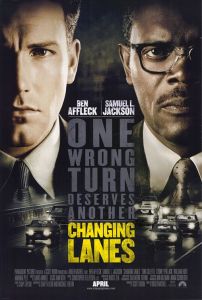 Don’t be misled by fancy marketing, Changing Lanes is no more a thriller than In the Bedroom (now that was some fancy misleading marketin’). At its core Lanes is a morality tale hiding under the clothing of thriller ilk. But while the film is surprisingly engaging the majority of it centers on Ben Affleck and Samuel L. Jackson doing a good or bad deed and countering one. And in this dilemma the deck is stacked for audience favorability. Jackson is a down-on-his-luck father fighting an impending divorce and trying to get a loan to purchase some real estate so his wife and kids won’t move away. Affleck is a cocky lawyer in a big firm who had an affair with his secretary (the chipped-tooth looking Toni Collette). Who do you think is the “good” guy? The film seems to bend over backwards to try and make Affleck not so bad, like showing him remorseful and pushed to the edge, under threats from his father-in-law and firm partner (Sydney Pollack), and being urged into a dark unethical territory by his own wife (Amanda Peet).

Jackson underplays his role, despite the snippets of vocal outbursts, and earns the compassion of the audience. Affleck plays Cocky Lawyer Man Who Becomes Humble and does a fine job. The supporting cast really shines in Changing Lanes especially Peet. Her one true scene involving her chilly sit-down with her husband is great in its sharp veer from what is expected.

Changing Lanes was directed by Roger Mitchell (Notting Hill) with a bit of nerves. Some scenes are shot from obtuse angles and the score has an inappropriate electronica taste. In the end though, Changing Lanes is an involving morality tale with some good lead performances.