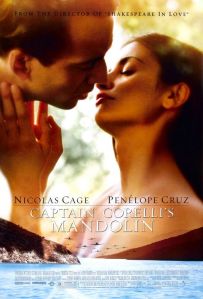 John Madden you sly dog. I don’t know how you do it but somehow you manage to get an accredited actress to take off her clothes for you. In your film Shakespeare in Love it was Gwyneth Paltrow going topless (which she also won an Oscar for), and thank God you didn’t get Dame Judi Dench to try it out with the previous film Mrs. Brown. And now with the horrifically titled Captain Corelli’s Mandolin you have coaxed the beautiful Penelope Cruz into baring her breasts as well, no doubt in hopes of winning some of that coveted Oscar gold. And although I appreciate you giving me the opportunity to see the lovely Cruz minus a stitch above the waist, frankly, Corelli ain’t no Shakespeare.

We open on an island on the offshoot of Greece in the start of the 1940s. The waters are blue, the sand is white, the people are happily ethnic, and it’s basically a postcard. The island is overpopulated with idyllic beauties and friendly people and then evil evil war had to come and steal the innocence. Cruz plays a woman who has a first name that I have no clue of or remotely how to pronounce it, but I am certain it began with a P. Cruz is studying to be a doctor under the tutelage of her wise old customed father (John Hurt). She’s engaged to be wed to hunky fisherman Mandras (Christian Bale) until the war threatens their peaceful isolated world. Mandras feels the patriotic urge to go to war and thwart the advancing Italians and Cruz pines for his safe return writing letter after letter with no answer to only fear the worst. 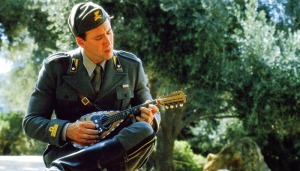 As the war continues the Italians do advance further and take occupation of the Greek island. Captain Antonio Corelli (Nicolas Cage) is amongst the divisions assembled to this Mediterranean isle. He is agreed to stay in Cruz’s home and, as always, begins to develop feelings for Cruz. She feels some as well but is torn on what her actions should be. Corelli, it turns out, is far more a singer than a fighter. He has a battalion of men he dubs his “opera” and they break into frequent song and an overall zeal for life. They run around drinking and singing on the beaches complete with topless women making this Italian occupation seem like summer camp.

The good times don’t last of course and the war rages closer and closer. Soon the Italian army surrenders and then the Germans come in to retake occupation of the Greek island. Corelli must decide to go home or help fight amongst the guerrillas and native people to keep their beautiful land away from Nazi hands.

Penelope Cruz seems to be heavily pushed on me by Hollywood. They keep casting her in movies and telling me I like her, when in fact, I have seen nothing of hers to prove so. She is too mute at times and the emotions that we should see tearing her up are simply dampened by her staring downcast or biting her lip.

Cage is an Italian-American, and yet his Italian accent is atrociously comical. His performance is like the Joker doing an Italian accent. He also kisses like he is trying to swallow poor Penelope’s tiny head. Somehow beyond my reasoning the talented Christian Bale got in this movie. He’s about as convincing as a Greek as Laurence Olivier was as a Moor. The rest of the cast is filled with Greek people portraying Greek people.

The love story of Captain Corelli’s Mandolin is a mishmash of un-involving war violence and a cloying romance that never gets into the proper gear. There are elements of guilt and affection, but they aren’t transcendent of any reality. The first time Corelli tells Cruz he loves her they have sex in a field that very moment. There is not enough groundwork laid to produce a decent romance. So the supposed “smolder” between Cruz and Cage is thematically unbelievable, and kind of a bit creepy.

Corelli suffers from A.I. syndrome in that it desperately needed to end twenty minutes earlier than it did. The fact that Cage survives a machine gun execution because a SINGLE PERSON stood in front of him is bad, but it gets even worse for the inhabitants of the Greek island. Some get hung by their own people, some get shot in the face from Germans, and then everyone must suffer after the war by having an earthquake level half of their town. This stretch of film goes from pointless to comically absurd. It’s like Madden fell asleep in his director’s chair and someone thought, “Well, let’s model the last act of the film after a Universal tram ride. Hey, can we have Jaws pop out of the water at some point?” Corelli has failed as a romance and during its end stretch it completely fails as any kind of cogent drama.

The direction is adequate by Madden but the script just doesn’t cut the mustard. In the end they rely on the old Hollywood principal of Nazis being pure evil, so much so they might as well have mustaches to twirl. I thought at one moment they were going to tie Cruz to a railroad track and would have preferred it if they had. This is a film caught between romance and war, and it does a disservice to both. The war is a naive afterthought and the romance lacks any credibility. The scenery sure looks nice though. In the end, Captain Corelli’s Mandolin is a film desperately out of tune.