A joke me and my friend Adam Kipp had going in a script we never started was about an elite tactical force known as the Superhuman Samurai Stereotype Squad. They were a group contained of all different minority killers but each was a bad stereotype of that minority – like the black man was a gangster rapper with one incredible fro, the Asian was a martial arts expert, the gay person was flaming etc. (this is not an example of how I feel toward minorities, just lampooning the lame stereotypes). So imagine my surprise when watching Disney’s Atlantis I see our joke played out in front of me, except it’s supposed to be taken seriously.

Nerdy historian and dreamer Milo (Michael J. Fox) gets teamed up with a ragtag group on an exploration to hunt for the missing land of Atlantis with the aid of a book his grandfather gave to him. Anyone else getting Indiana Jones and the Last Crusade déjà vu? This group features a tough blonde German girl Helga, a Latina mechanic who also happens to be a boxer, a crazy and dirty Frenchman, a kindly heroic black doctor that resembles Disney’s own John Henry, a lovably kooky Southerner cook, an old no-nonsense woman, and even a quirky Italian explosives expert. Assemble Superhuman Samurai Stereotype Squad!

Through some underwater mishaps the crew finally does get to the fabled city of Atlantis and is met by the King and Princess Kida, who takes a shine to clumsy Milo. They discover secrets of the lost civilization and, as always, members of the crew turn on each other in an attempt to plunder the city of its riches. The double-dealing is led by the ship’s captain Lyle Tiberius Rourke (James Garner) who has a chin that would make Kirk Douglas drop dead with envy.

There are plot holes in Atlantis big enough to build a Disney theme ride through. It turns out as revealed in the opening minutes of Atlantis that the Atlantians had mastered the technology of flight, mechanics, energy fusion, and other such scientific marvels. A race of people before even the Minoans around 800 BC had mastered the art of mechanical flight? And WE don’t even have flying cars yet but these people 2800 years ago had flying fish made with metals that they had no way of getting their hands upon? Or take for example the fact that Princess Kida greets the group in English, saying that they somehow know all languages. But if their civilization was plunged to the bottom of the sea a freaking 2800 years ago how can they remotely know languages that never existed until hundreds and hundreds of years afterwards?

Want more plot holes? Please, you know you do. How about when a character hurtles to their supposed death when they fall something like 250 feet down onto hard rock. Except later we return to this fallen character who still manages not only to live but also to turn around and fire one last perfect shot. There are so many others that they can’t all fully be mentioned. 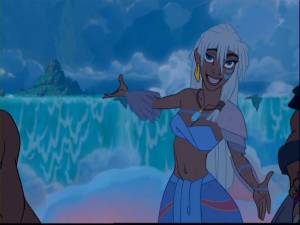 Atlantis is supposed to be like one of the old 50s adventure films like 20,000 Leagues Under the Sea except it never manages to be adventurous at all. The film does allow for people to actually die, though all off camera, which I can’t remember happening in a Disney picture unless it was the villain. There are some moments of excitement but they end too quickly and give the audience back to the characters and story it doesn’t want to return to. The animation is surprisingly sub-par with a few awkward moments that seem very rigid and static.

Atlantis is a general waste of talent and strung together with a bad script. The fact that not one kid in the audience, nor myself, laughed once in indicative of how this movie is flopping. The movie is not engaging for kids and the opening sequence with subtitles will surely go over their heads. This film is not a fun ride. It seems like the profitable-yet-creatively-stagnant Disney formula for the last decade is finally imploding. If you do have a choice go see Shrek instead.