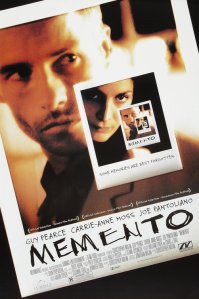 A film is taking the nation by storm and it isn’t anything from a big studio. In fact it’s the first release of a new indie production house called New Market, and these people have lassoed a real winner. Memento is a murder mystery bubbling with perfect elements of noir, suspense, and trickery. Memento is the tale of Leonard Shelby (Guy Pearce) who is searching desperately for John G., the culprit he believes that raped and murdered his wife. Along the way Leonard gets assistance from his friend Teddy (Joe Pantoliano) and Natalie (Carrie Anne-Moss), a down on her luck bartender. 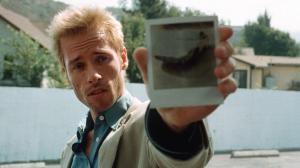 Except Leonard has a peculiar problem plaguing his one-man investigation for justice. After the attack on his wife the assailant knocked him out, and Leonard was left with no short-term memory whatsoever. Leonard cannot develop new memories. So if something happens to him, he is liable to immediately forget it within five minutes. To aid himself he write on small post-its telling him which car is his, what hotel he’s at, etc. all over his body are tattoos of clues he has amassed. He takes Polaroids of people and writes their names on them to remind him of the faces he sees that he won’t remember. Leonard’s investigation is about what his notes tell him. He doesn’t know whom he can trust and whom he cannot.

If this wasn’t enough to make Memento interesting the entire tale is told out of sequence and run from end to beginning. The entire film is told backwards. This action robs the audience of the same information that escapes Leonard. We too know neither who to trust. The effect could fall into gimmick territory but makes the movie fresh and adds for some great comic situations as well, like when Leonard awakens with a bottle of champagne in his hand and tells himself he doesn’t feel drunk.

Pearce is gripping as the emotionally shattered and fractured Leonard. He is a man that can trust nothing and must live from repetition, but is intent on bringing his wife’s killer to bloody justice. Pantoliano and Moss provide good support as the weary characters that weave into Leonard’s plight. The acting it excellent all around. They leave us guessing and reassembling our perceptions as more of the puzzle unravels.

Memento is top-notch film noir. It’s a breathless thriller of a first rate caliber. The direction given by Christopher Nolan from his screenplay is tight and highly effective. The character of Leonard is fleshed out in all his paranoia, pain, and frustration. Nolan has delivered a gift to movie audiences always hungry for fresh material. One has to see the film a second time just to see how well the segments play together.

Memento is the coolest movie around. Rush out and see it, then see it again, and then again. It’s the best movie of 2001 by far as of now and has the Best Original Screenplay Oscar locked [Editor’s note: it lost to Gosford Park of all things.] It’s destined to be a cinematic classic people will talk about for years.