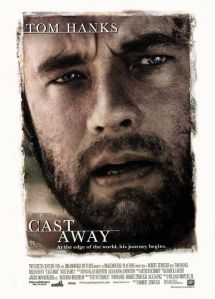 Strand Tom Hanks on a desert island for years? Sounds too good to be true to many a disgruntled movie goer. Such is the state in Cast Away, Robert Zemeckis’ existential meditation on man, nature, FedEx and their product placement checks, and of course… volleyballs.

Hanks is yet another everyman, except he’s a real stickler for time and order as a FedEx supervisor. His girlfriend (Helen Hunt) is pushing for marriage but hey – they’ve got all the time in the world, right? So Tom boards a FedEx flight headed for the Southern Pacific that hits a nasty collision with a powerful storm. The plane goes down abruptly in what is likely the most terrifying plane crash ever performed on film. Hanks washes ashore onto a mysterious deserted island after drifting alone in the vast ocean. Without civilization and without human contact he must start all over just to survive the day. So becomes the Odyssey of Island Tom.

Cast Away hits one out of the park with its near dialogue free middle act with Tom’s first days upon his new island home. Hanks struggles to do everyday things from finding food to creating a makeshift shelter. As Hanks goes through these daily troubles the audience is with him every moment and learns as he does. Cast Away‘s middle is fascinating to watch. After a few days some packages from the crash wash ashore including a volleyball that Tom turns into his best friend. “Wilson” is Hanks’ companion and is totally understandable how one would branch out for contact under the circumstances. Plus, Wilson’s a dynamite celebrity of his own right now. 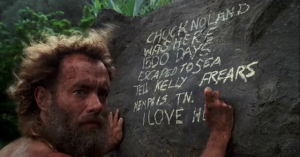 Hanks’ acting is his usually above average output, but his whole role seems more like a showcase for his method acting than the acting itself. The first half of Cast Away was shot then they took a year off so Hanks could become scruffy, thin Caveman/Unibomber Hanks. The transition is fun to watch and remarkable for an actor to devote themself completely to their role. But the part itself, and Hanks’ show, seem more spectacle than substance. Helen Hunt pops up in the beginning and end proving that she can somehow manage to be in every film in December. Pretty much the next actor in the film would be… well, a volleyball. Cast Away is basically a one-man show.

Despite a wonderful middle ‘Cast Away’ is suffering from the opposite syndrome of Saving Private Ryan: strong middle, weaker beginning and end sandwiching it. Our opening plays like an extended commercial for FedEx, complete with the dazzling FedEx package POV cam (coming soon!). The end plays like a thank you card to FedEx. The ending also suffers from extreme let-down from multiple climaxes that don’t end the film but just give way to another climax. By the time the movie does end you’re exhausted.

Zemeckis lends a skilled hand toward the direction, the script plays to the strengths of the tale good enough, and Cast Away has its moments but becomes too heavy-handed at certain periods. Still, the volleyball is good. Go for the volleyball.