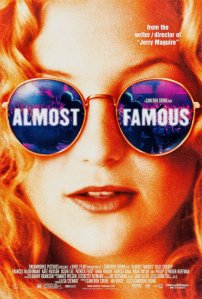 Cameron Crowe’s semi-autobiographical 70s rock opus is like a gigantic hug. It’s warm, engrossing, feel good, and leaves you with a smile wishing for more. Almost Famous may be the best movie going experience of the year. You likely won’t have a better time from a movie.

Fresh-faced newcomer Patrick Fugit plays the 15 year-old version of Crowe who is a budding writer for Rolling Stone. He’s tapped to tour and send in a story on the fictional band Stillwater fronted by singer Jason Lee and guitarist Billy Crudup. Stillwater is everything the typical early 70s rock band was and should be: long hair, tight pants, and continuous inner turmoil and squabbling. Little Fugit captures all of this with wide-eyed exploration as he stretches away from his overprotective mother played by the lovely Frances McDormand. Phillip Seymour Hoffman also pops in to do a brilliant portrayal of music critic Lester Bangs. Kate Hudson shines in a break-out performance as a “band-aid” to Stillwater; which is an uncertain mix of naive groupie and musical muse. She’s together with fellow “band-aids” Anna Paquin and Faruiza Balk. 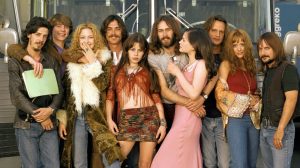 The writing of Almost Famous is textured and fully satisfying. The turns it takes down the road are expert and you know you are in the hands of a true artist. Crowe’s direction again makes leaps and bounds in improvement with every new feature. He and his wife wrote all of the songs the fictional band performs and it sounds like, to my ears, he had a few more job offerings he could have easily been suited for.

The acting is phenomenal with every cast member contributing nicely to the fold. Crudup is the anchor, Hudson is the gleaming star, Fugit is the tender surprise, Lee is the emotional lightening rod, and Frances is the mother that we all would love to have deep down inside. She is at the level that is most difficult for a parent: she must begin to let go so they live their own life, yet she’s raised him from harm since he could spew mashed carrots. Surely, if the world had justice Frances will be winning her second Oscar.

Almost Famous is a breathing work that borderlines perfection. It’s a great time to be had just sitting and experiencing what the movie has to offer.