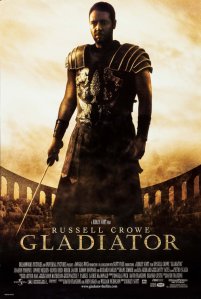 Director Ridley Scott has given the world of cinema some of its most unforgettable visual experiences. But can Scott breath new life into a genre whose heyday was when a badly dubbed Steve Reeves oiled his chest and wrestled loincloth-clad extras in the 1950s?

The year is roughly 180 AD and Rome is just finishing up its long-standing assault on anything that moves in the European continent. General Maximus (Russell Crowe) merely wants to retire back to his loving family and get away from the doom and war that has plagued his life. This is made all the more difficult when the ailing Emperor bypasses his treacherous son Commodus (Joaquin Phoenix) and decides to crown Maximus as the Defender of Rome. Because of this Commodus rises to power through bloody circumstances and has Maximus assigned to execution and his family crucified. You’d think crucifixion would be so passé by now. Maximus escapes only to be sold into slavery and bought by a dirt-run gladiator training school. As he advances up the chain and learns the tricks of the primal sport he seeks but vengeance for his fallen family.

Gladiator is an absorbing and sweeping spectacle of carnage and first-rate entertainment. The action is swift and ruthlessly visceral. The first movie in a long time to literally have me poised on the edge of my seat. The blood spills in the gallons and life and limb go flying enough your theater owner may consider setting down a tarp.

What Gladiator doesn’t sacrifice to the muscle of effects and action is storytelling. Are you listening George Lucas? Gladiator may unleash the beast when the rousing action is loose, but this is coupled with compelling drama and complex characters. Phoenix may at first seem like a snotty brat with an unhealthy eye for his sister (Connie Nielsen), but the further Gladiator continues the more you see in his eyes the troubled youth who just wants the love of his father that was never bestowed to him. Maximus is a devoted family man who regularly kisses clay statues of his family while away, and must ceremoniously dust himself with the earth before any battle.

The acting matches every sword blow and chariot race toe-for-toe. Russell Crowe marks a first-rate staple of heroism. Every calculating glare he exhibits shows the compassion and ferocity of this warrior. He becomes a rare breed – an action hero who can think and actually act. Oliver Reed, in what sadly was his last role, turns in a splendid and charismatic turn as the head of the gladiator school of Fine Arts and Carnage. Mysteriously everyone carries a British accent closer to them then a toga two sizes too small. Even Crowe who is nicknamed “The Spaniard” speaks like he walked out of Masterpiece Theater.

The effects and visuals are a sumptuous feast. The aerial shots of Rome and the Coliseum are simply breath taking. Gladiator rivals American Beauty for the most rose petals used in a movie, except in this one they don’t shoot out of Mena Suvari’s breasts.

Ridley Scott’s track record may be hit or miss but Gladiator is definitely one sorely not to be missed.