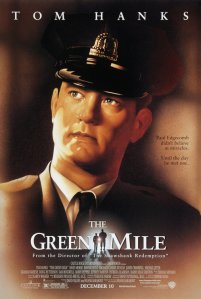 A prison in the heart of the deep South during the era of the Great Depression is not usually the locale you’d find a somber tale of earnest discovery and passionate awareness to the follies of life. Yet here arrives the long anticipated The Green Mile, the second in tag-team efforts from director Frank Darabont and novelist Stephen King in their own genre creation of nostalgic feel-good prison flicks. All the swelling hype could manage to make the movie seem overbearing, but if you’ve got a free afternoon and a butt made of steel then try The Green Mile.

Darabont seems like the perfect visual interpreter to King’s epic narrative spinning of good, evil, and all that fall between. The movie moves at the pace of molasses and clocks in at over three hours in length. Not exactly audience friendly fodder but one and all will be grateful for the decisions taken to build character development and tension instead of blindly rushing through.

Tom Hanks plays a prison guard on the Death Row block of a Southern penitentiary. Despite the bleak and grim surroundings his humanity still shines through. He escorts and oversees the final moments of many men’s remaining breaths along the final walk of green linoleum tile to the electric chair. Enter one mysterious morn John Coffey (Michael Clark Duncan), a towering giant that seems to break all the rules each of the guards on cell block E has come to realize through their years. Coffey has been convicted of the rape and murder of two little girls, but as Hanks soon learns things aren’t always what they seem. The 7-foot miracle worker displays scenes of empathetic healing like to Christ himself. Hanks views are turned and his eyes open, and that’s just the beginning of the heartstrings being pulled. To release anymore of the plot would be a crime punishable by Ole’ Sparky himself in the Green Mile. 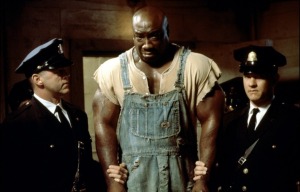 The pacing is smooth and wrings out every droplet of mystery and drama needed. The Green Mile‘s comprehensive fable quality transcends the period just like The Shawshank Redemption did as well prior. ‘Mile’ should be expected to be a front-runner for Oscars when balloting begins.

The ensemble acting is magnificently eclectic and truly inspiring. Hanks’ name is so synonymous with Oscar that he might as well shave his head and paint his body gold because come nomination time this man’s name is going straight to the ballot. Other stars give thoughtfully deep and refreshing performances guaranteed to turn a few heads. Duncan’s gentle child-like giant is serene and a benevolently touching figure of innocence and warmth. But one can not forget the presence of a very special rodent by the name of Mr. jingles that deserves billing above the credits itself for the quality performance it puts on.

The Green Mile is a sad, touching ,and rather powerful movie that speaks to the viewer’s emotions and gladly earns every one of them. In the end The Green Mile is nothing beyond a long yarn of a fairy tale; but one told so exceptionally, one performed so extraordinarily, and one directed so deftly that you’ll gladly journey down that mile with ease.