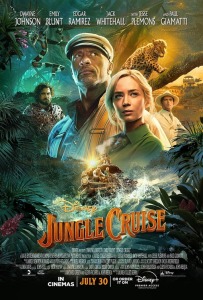 Disney turned a theme park ride that mostly involved sitting into a billion-dollar supernatural adventure franchise, so why not try another swing at reshaping its existing park properties into would-be blockbuster tentpoles? Jungle Cruise owes a lot to the Pirates of the Caribbean franchise, and actually owes a little too much for its own good. For the first half of the movie, it coasts on the charms of stars Dwayne Johnson and Emily Blunt and some light-footed visual misadventures. Then the second half turn involves a significant personal revelation, and that’s where the movie felt like it was being folded and crushed into form to closely resemble the Pirates franchise. It gets quite convoluted and littered with lackluster villains, too many and too stock to ever establish as intriguing or memorable (one of them is a man made of honey, so that’s a thing). I found myself also pulling away in the second half because of the inevitable romance. Their screwball combative banter between Johnson and Blunt gave me some smiles and entertainment and then, as they warm to one another, it sadly dissipated, as did my interest. The comedy is really labored at points. Johnson keeps referring to Blunt as “Pants” because she’s a woman and she wears pants in the twentieth century. It was not funny the first time and it’s not funny or endearing after the 80th rendition. The supernatural elements and curses feel extraneous and tacked on. With the Pirates films, at least the good ones, there are a lot of plot elements they need to keep in the air and you assume they’re be able to land them as needed. The competing character goals were so well established and developed in those movies and served as an anchor even amid the chaos of plot complications and double and triple crosses. With Jungle Cruise, it feels like a lot of effort but also a lot of dropped or mishandled story and thematic elements. This feels more creatively by committee and the heavily green screen action is harder to fully immerse with. As a wacky adventure serial, there may be enough to keep a viewer casually entertained, but Jungle Cruise feels too beholden to the Pirates formula without bringing anything exciting or fresh on its own imagination merits.