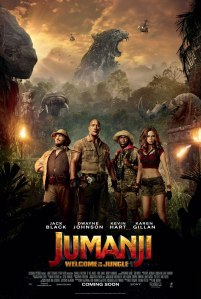 Jumanji: Welcome to the Jungle is a twenty-year plus sequel that is way more fun than you would have expected for a twenty-year plus sequel. It’s updated to modern-day by ditching a living board game and instead transporting four Breakfast Club high school stereotypes into the world of an old school adventure video game. The biggest boost is the camaraderie and comic interplay of the four leads (Dwayne Johnson, Kevin Hart, Karen Gillan, Jack Black), each blessed with memorable moments to shine and a satisfying arc. The adults are great at playing as children-in-adult-bodies. The film does a good job of introducing the rules of its world while also explaining the mechanics of video games (cut scenes, life meters, re-entering the game), at the same time holding your hand through it all. The satire of video games is often amusing like the strengths/weaknesses discussion, and there’s a very good reason why Gillan is dressed in a skimpy outfit, which even the movie calls out. It’s a simple story told without subtlety but this movie is packed with payoffs and spreads them evenly throughout. The actors are truly delightful and this should be a breakout role for Gillan. She is very adept at being silly with physical comedy and has a wonderful bit where she tries to seduce some guards after some flirting coaching from Jack Black. Thankfully, Black being a self-obsessed teen girl on the inside doesn’t veer into transphobic/homophobic mockery. The awkwardness of the body swap scenario is never forgotten, which lends itself to consistent comedy and heart. There are a lot of great little moments and enjoyable set pieces. Jumanji is a tremendously fun movie that won’t insult fans of the original. If you’re looking for an unexpected amount of entertainment this holiday season, check out the Jumanji sequel and one of the year’s best comic teams.