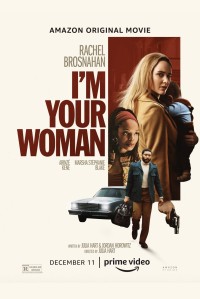 I’m Your Woman does for the gangster/crime genre what You Were Never Really Here did for the loner revenge thriller, namely demystify popular tropes and find a humanity often missing below the surface. We’ve been inured to gangster cinema for decades and love following the criminal antics of bad men without fully thinking about the collateral damage on the periphery of their story. I’m Your Woman imagines a typical crime story but from a very human perspective, focusing on the wife who has to deal with the confusion and fallout from her husband’s misdeeds. It’s a refreshing and modern take that works as moody paranoia thriller just as much as it does a subversion of them.

It’s the 1970s. Jean (Rachel Brosnahan) is married to a man who she knows does some very bad things. One day Eddie (Bill Heck) comes home with a baby that he declares is theirs. Where did this baby come from? Jean cannot say but she chooses to raise this child as her own son. Another day, her husband goes out with some friends and never comes back. One of his associates barges into her home in the middle of the night, bloodied, and tells her that Eddie is gone and she needs to likewise be leaving in a hurry. He tasks Cal (Arinze Kene) to drive Jean and her baby out of town, watch over her, and wait until the heat dies down or everyone else just ends up dead.

And with that, the movie is off to a gallop and Jean doesn’t know what’s happened to her life, only that it’s bad, and she doesn’t know where her husband may be, or even if he’s alive, but she’s told that people will be coming for her to get to him or to punish him, and so she must be whisked away in the middle of the night into hiding. We as the audience are left very much in the dark with Jean, and this precious little information allows us to very strongly feel her paranoia and anxiety. Every scene when she’s been left alone and sees a car coming closer, every knock on the door, it raises the suspense because your mind, like hers, is questioning everything. Admittedly, some will find this to be rather boring and a lacking perspective, but I thought the approach of director/co-writer Julia Hart (Stargirl) was to highlight the perspective of a character often taken for granted and forgotten in gangster cinema and its celebration of doomed antiheroes. We’re used to criminals neglecting their molls, and I’m Your Woman declares its allegiance right in the title. We’re on the run with this woman, trying to make sense of the plight as we go, and being trapped in a position of limited information is an intriguing and relatable dash of realism.

There are violent outbursts from time to time, but much like You Were Never Really Here (the two of these movies would make a good double-feature, folks), the violence is far from glorified and often denied to the viewer. Much of the violence is depicted off-screen and we watch Jean stumble upon its awful consequences, again linking up with the perspective of a bystander to the careening violence and mayhem from her romantic attachment to a life of crime. There’s a mass shooting inside a club that is deeply unnerving because of our limited perspective. We’re tethered to Jean and hear the off-screen gunshots getting closer, the screams of civilians, and the camera keeps running without a cut as she dashes down a long corridor but cannot find an exit. She ducks into a phone booth and we watch armed men pass by. She waits and makes her escape, tripping over bleeding bodies, and the camera continues in one ongoing take. It’s nerve-wracking but it also denies us coherency or clarity which makes it so much scarier (I was having visions of what people might have gone through with the Pulse nightclub massacre). Given its subject, there are moments of sudden, shocking violence but often it’s to disorient us and not as some delivery system of satisfaction. It would be very easy to follow a more traditional formula for Jean where being thrust into fending for herself turns her into a steely killer that lays waste to the men hunting her as finds her own means of authority. That was essentially the plot of last year’s The Kitchen, a fairly mediocre and disappointing movie about threatened mob wives. That’s not this movie. Jean doesn’t become a ruthless mob boss. She certainly attains an agency that she didn’t have at the start of the film and a well-earned resilience, but she’s always a grounded, frantic, and relatable person trying to keep their wits and not serve up a witty retort. 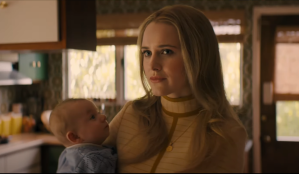 Because much of the movie involves the protagonist in wait and picking up small pieces of information to reform her sense of self and her dire circumstances, the digressions had better be worth it. I fully believe I’m Your Woman is going to be a divisive movie and it will entertain likely as many people as it leaves cold. I found the small digressions to be interesting and doing their part to strip away the movie world heroics and trappings, allowing people to simply act like recognizable people. There are little things that stand out, like a kind neighbor simply recognizing how exhausted a new mother looks, or a method of soothing a baby passed down from father to son, or the discussion of making a child laugh being the clincher for parental ties. There’s a lovely moment halfway through where Jean and Cal are stopping at a café. She delivers a monologue about her unexpected child, about her inability to carry a pregnancy full-term, about her prior miscarriages and her divining what that means about her involvement in crime, and it’s one of those moments where it feels like a character is just baring their soul. Jean is so vulnerable, so remorseful, but also so lost yet hopeful of what being a mother could mean for her, a title she says she tries to downplay but had really been her heart’s desire. I enjoyed getting to spend time with Cal and those he links Jean up with later. There’s a found family aspect of dislocated people trying to navigate the hand they’re dealt without pity or commiseration. When the movie stops to take a breath, that’s when it kept solidifying its growing authenticity for me.

Brosnahan (The Marvelous Mrs. Maisel) is a fine anchor. She has to constantly be alert and anxious, as well as exhausted, so even when she’s at rest her character can never fully be rested. It means that even during the quiet moments alone, Bosnahan is giving the viewer a terrific sample of non-verbal acting prowess. I appreciated that Jean isn’t stupid. She’s ignorant insofar as she lacks crucial knowledge, but throughout I’m Your Woman she responds to potential threats and suspicions in ways you would hope and avoids more than a few disasters. Brosnahan also has an easygoing chemistry with Kene (How to Build a Girl) that makes them a winning team.

I found I’m Your Woman to be a refreshing take on crime stories by re-examining life from a character very often left behind while the men run their schemes and accrue their violent demise. It’s an interesting character study of a gangster’s moll and what living with the consequences of a bad marriage can involve. There’s terror and bloodshed but it never feels sensationalized or glamorized. Our heroine proves herself capable of surprising those who discount her, but that doesn’t mean she transforms from a scared, confused, and desperate person into an action hero. The filmmakers have brought a reflective and humanist take on the gangster genre, and your appreciation will likely also benefit from familiarity with the genre and its tropes. If you’re subverting expectations, knowing those expectations is somewhat essential to the desired effect. I’m Your Woman is worth your time if you ever wondered about the life of so many of those underwritten, possibly stock supporting roles in a gangster movie and asked about their interior lives.