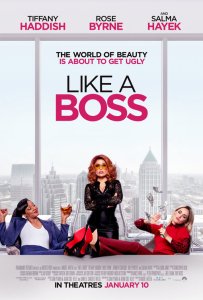 There’s little else as energy-zapping as a comedy fumbling for its funny, and that summarizes the disappointing Like a Boss, which is far from being boss-like. Tiffany Haddish and Rose Byrne star as best friends who own a makeup company together and Salma Hayek is the rich CEO who wants to buy their company and drive them apart. That’s about the story because the movie feels like it was one of those imrpov-heavy vehicles designed for the likes of a Melissa McCarthy where the scenes are barely sketched in with the assumption that the performers will discover something funny in the moment on the day of filming. Except this never happened. Like a Boss constantly feels straining, groping, struggling for any comedy from scene to scene. There isn’t one interesting comic dynamic or a set piece that felt really smartly set up and developed. There aren’t even that many set pieces outside a sequence where the ladies eat ghost peppers and cannot handle the heat. There’s one part where they destroy a drone and have to hide it. Nothing comes from this. There’s one part where the ladies are smoking a joint and it falls into a baby’s crib, and you’re waiting for the escalation, but that’s it. Nothing of consequence happens. Mostly the movie is so desperately grasping for whatever it can find to be funny, and every actor feels like they’re in a different movie. I started mentally checking out halfway through. I chuckled a few times but my dispirited sighs outnumbered them. I like Haddish. I like Byrne. I like Hayek. I like director Miguel Arteta (an unexpected Beatriz at Dinner reunion). I like that this is an R-rated comedy aimed at empowering women. The problem is it still needs to be funny. The best friends forever say how much they love one another but they’re also explaining all of their problems and solutions in exposition-heavy vomit sessions to assist the audience (“I know you’ve always have trust issues because of your mothers, and…”). For the scary boss antagonist, Hayek’s character is weirdly impotent and too easily foiled, including being upstaged at her own company’s launch party and deciding to do nothing to stop her usurpation. Like a Boss is a limp and flailing comedy that just made me sad.