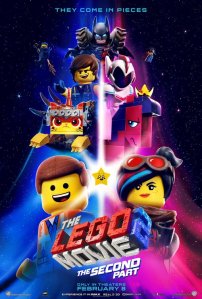 Everything might not be awesome but it’s still pretty great for this creative, heartfelt, and hyperactive family franchise that is better than it has any right to be thanks in part to returning writers Phil Lord and Chris Miller. It’s not quite as fresh and clever as the first go-round but it manages to better its predecessor in some key ways. Now that we know the colorful and zany antics of the animated Lego characters are also simultaneously the imaginative play of a real-world family, it provides a deeper thematic subtext with the unseen nature of siblings in conflict. I remember my own younger sister wanting to play with me and my toys, and me rebuffing her, and the film struck home some key emotional points about the inclusion of cooperative play. The different styles of play are on display as our characters are abducted by a shape-shifting space queen (voiced by Tiffany Haddish) who is determined to marry Batman and possibly rule the universe. A fantastic running joke is how transparently malevolent the queen is, which leads to an even better payoff. There are more songs and each is pretty well constructed, relevant to the story, and assuredly catchy, like “Catchy Song” used to brainwash people through pop, and a mournful version of “Everything’s Not Awesome” that becomes genuinely inspirational and uplifting by its climax. The life lessons are easily digestible and the sense of breezy fun is still alive and well. I was laughing throughout, sometimes quite hard, and the brother/sister subtext had me wondering if I owed my younger sister a decades-late apology for my behavior (sorry, Natalie). Lego Movie 2 is a worthy sequel that finds new and interesting ways to build off the irreverent original’s model. Bring on the Toy Story 3-style ending where our grown-up owner says goodbye to his childhood toys and friends. At this point, Lord and Miller can do anything and imbue it with wild wit, whimsy, and unparalleled mass entertainment (except Star Wars, I suppose).