Rampage is exactly as advertised, a big, dumb monster movie based upon a flimsy premise of an arcade smash-‘em-up, and it’s also just about everything you’d ask it to be. This movie is ridiculous, no question, but I walked away feeling like the filmmakers recognized this and embraced its ridiculousness.

Davis Okoye (Dwayne “The Rock” Johnson) is a primatologist at the San Diego Zoo. His prized primate, an albino gorilla named George, is undergoing very dramatic changes. A canister of secret genetic-altering gas has fallen from a scientific space station, landing in George’s gorilla pen, the hills of Montana, and in the Everglades. Separately, a wolf and a crocodile are rapidly growing in size, as is George, who is also becoming more aggressive and violent. Dr. Kate Caldwell (Naomie Harris) is a disgraced scientist who may know how to reverse the changes. The U.S. government, lead by Harvey Russell (Jeffrey Dean Morgan), relocates George to a government lab; however, he breaks loose midair. He and the other monstrous animals are heading to Chicago, lured by a signal intentionally staged to draw them in one very smashable location.

It’s not exactly a winking, satirical statement on the monster movie genre, but I think Rampage is still self-aware. Take for instance what befalls The Rock. His character is literally shot in the gut (no exit wound) and miraculously recovers and runs through crumbling buildings, leaps over rubble, tussles with giant monsters, and even outruns them on the ground, and is thrown this way and that. This happens for the entirety of the last act while, and I don’t think I can stress this enough, A BULLET IS STILL LODGED INSIDE HIS CHEST CAVITY. However, he is The Rock, our modern equivalent to a living Superman, so the movie shrugs and asks us to just go along with it, and because I was entertained I did. There were several moments where I just shrugged and said, “Sure, let’s do that,” but usually these decisions were in the service of the blockbuster elements that I would want to see with this kind of premise. It’s silly and stupid and baffling at times, but Rampage knows what elements to pump up and what elements an audience won’t really care about. The villain’s plot is completely nonsensical and amounts to, “Step 1) lure the giant monsters to one central tower in Chicago, Step 2) ?, and Step 3) profit.” I have no idea what they were hoping to accomplish but their lamebrain thinking efficiently facilitated the monsters getting closer to peak smashing form.

You can look at three performances to get a sense of those who understand the big, dumb, fun movie they’re in, and those who have misjudged what kind of movie they’re in. Jeffrey Dean Morgan (TV’s Walking Dead) knows exactly what kind of movie he is starring in and has the time of his life as a scenery chewing, gun slinging, folksy quipping cartoon. Every scene he slides into, the man has a gleeful glint in his eye at what he gets to do. You almost expect like a musical motif to accompany him every time on screen. It’s enough that you think he might just strut off into another movie all his own. On the opposite end are the film’s villains, callous, rich, and almost bumbling in their sense of evil. To their credit, Malin Akerman (TV’s Billions) and Jake Lacy (TV’s I’m Dying Up Here) are mostly meant to verbalize their villainy for the audience. Whenever we cut back to them, the brother and sister are helpfully explaining the lengths of their scheme. Lacy is goofy dumb and relatively useless outside of deliverer of exposition. Akerman fares worse trying to be a no-nonsense bitch of business and is far too serious. When both of these actors are onscreen, the movie powers down, sapping its fun. When Morgan appears, it’s like Rampage can once again be the big, dumb, fun movie we crave. 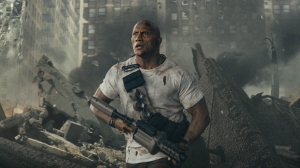 Unexpectedly, the best relationship in the movie is that of The Rock and a giant CGI albino ape, proving once again that Johnson’s charming bonafides know no limits. George the gorilla is given far more nuance than any of the other supporting characters, which isn’t saying much, yet Johnson’s charisma is able to lift all on screen partners. Their funny, warm-hearted relationship may actually stir some emotions in you come its heroic climax, and that by itself is astounding. Johnson’s character back-story is kept to a relative minimum as not to gum up the narrative expediency (he prefers animals over people, but not in… that way). He’s a reliable anchor for audience engagement that he can sell the most ridiculous, as detailed above. It’s been quite an ascent for Johnson over the course of the last ten years, and my pal Dan Nye observed that he’s now been playing actual characters rather than recognizable versions of himself. Davis Okoye is more or less The Rock: Zoologist, but it’s still a welcomed development. The Rock could star alongside an actual rock and glue your eyes to the screen.

The special effects are also quite good for this sort of brainless caper. George comes across as a genuine creature, not necessarily with the depths of say Andy Serkis’ Caesar, but what CGI-performance does? The computer effects do an excellent job of communicating actor Jason Liles’ (Death Note) mo-cap performance and make the big guy sympathetic even as he rages out. I enjoyed that, much like Alex Garland’s Annihilation, the animals are not necessarily demonized for behaving like nature intended. They’re creatures undergoing a change they cannot understand and acting accordingly like animals would. The crocodile is impressive for its evolutionary mutations and textured, especially when we see its gaping mouth open.

As far as its stated mission, Rampage smashes things up but good. Director Brad Peyton showed with 2015’s San Andreas that he’s essentially the diet version of Roland Emmerich, and that’s okay. The action is fun above all else and Peyton prefers long visible shots. If we’re going to see a bunch of monsters, let’s actually see them (ahem, 2014 Godzilla). I felt like Peyton was far more invested in this movie and his shot selections finding interesting arrangements, like a slow-mo shot of jaws snapping together on a passing fighter plane. Peyton understands the significance of scale, letting the sheer size of the monsters communicate the immeasurable danger. There’s an early confrontation with the giant wolf in a Wyoming forest that’s chaotic, suspenseful, and demonstrates how freaking fast these creatures can be at their size. A prologue in space is genuinely thrilling and the zero gravity aerobatics provide an extra feeling of helplessness against a mutant attacker. By the end, when all three monsters descend on Chicago, Rampage becomes the popcorn movie experience that it has promised.

Nobody is going to label Rampage as a smart movie but it is aware of what it is. This is a big, dumb movie that aspires to merely be an awesome big, dumb movie, and that prioritized sense of fun pervades the relatively fast-paced film. The Rock is running around with his hulking ape-bro and wrecking havoc. This is the kind of movie where a giant gorilla mimes the universal physical symbol for sexual congress. This is the kind of movie where they feed a person to that giant gorilla. This is also the kind of movie where The Rock has a bullet lodged in his gut for the entire climax. This is a movie that has no airs about it and simply wants to entertain a mass audience. The Rock is a consistently charming and very capable action lead, and the relationship he has with his giant ape-bro is surprisingly chummy and sweet. If you’re looking for a monster movie that has no embarrassment about what it is, let alone being based on an arcade game, then Rampage is going to be a stupidly enjoyable time out at the movies.