I’ll confess something upfront: I have no interest in cars whatsoever. Never have. I don’t care. Seeing sexy cars with their gleaming and purring engines, well it does nothing for me. Hearing people talk about American vs. import or different engine capabilities, well it puts me to sleep. I get no thrill from cars alone. What I do get thrills from are when the cars are utilized in exciting action sequences that are well developed. I enjoy the role the cars play rather than the mechanics of the cars themselves. I’ve never watched a full Fast and Furious movie until the 2009 sequel, the fifth, which added notable franchise-lifter The Rock. I was won over by the wow-factor of director Justin Lin’s bombastic action. This is not a franchise for me from the gearhead content; however, I have become a fan thanks to the talents of Lin, the inclusion of my man crush The Rock, and some truly spectacular action set pieces. Fast and Furious 6, or Furious 6 as the onscreen title declares, is pretty much everything I thought it would be: dumb, loud, physics-free, and boasting remarkable action sequences, and it delivers.

It’s years after Dom (Vin Diesel) and Brian (Paul Walker) and their crew pulled off their epic heist in Rio. Hobbs (Dwayne “The Rock” Johnson) recruits Dom’s team for help nabbing a really bad guy with his own really bad team. Owen Shaw (Luke Evans) is a military-trained Brit who is hijacking advanced weapon parts to put together a super weapon that can knock out the power grid for a country. Dom’s ready to turn down the offer, content to live it up in paradise, when Hobbs shares a photo of Letty (Michelle Rodriguez), alive and well, and part of Shaw’s wrecking crew. Letty, Dom’s old squeeze, was thought dead, but it turns out she has amnesia, and Dom is determined to foil the bad guy and reclaim his girlfriend. 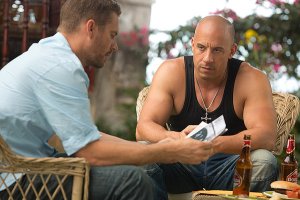 When I say Fast and the Furious 6 is a ridiculous movie in the extreme, I mean that as a compliment and a detriment. The movie never attempts to be anything outside of a loony, high-octane action thriller that gleefully ignores reality. Characters will fly off cars at great speeds, crashing into parked motor vehicles as “safe landings.” Brian will get himself thrown in the same prison as a notorious criminal, gather his needed intel, and escape all within a couple of days. The bad guy’s plan is also one of those only-in-the-movies super weapons. For goodness sake there’s even the hoariest of plot devices – amnesia. Really, Letty can’t remember anything. How prevalent is amnesia? Movies make it seem like it’s one Flintstones-style bump on the head away. Then there’s the massive amounts of wear and tear the heroes take on, their cars take on, and in general their superhuman status. But anyone expecting these films to adhere to a recognizable reality, especially after five movies, is adrift. Part of the appeal of the franchise is exactly its over-the-top lunacy with its action.

Having only really checked into the franchise one movie prior, I’m sure that there are plenty of moviegoers who are wrapped up in the ongoing saga of Dom and Brian and their motorin’ crew. I didn’t care about the characters; well, I generally liked most of them in an abstract way, but I was never that involved with them. I enjoyed The Rock’s character the most but that is also due to the innate magnetism of The Rock, someone Diesel could take some serious notes from. I say all this because there is a lot of time spent on the ongoing character relationships between Dom and his amnesiac love, Letty. He’s trying to pull her back, reminding her of the memories he thinks are tucked away, and they talk and drive and talk and I was bored. Perhaps if I had four movies worth of investment I would care more, but I don’t. Then again, we’re talking about a romance between Diesel and Rodriguez, both fine genetic specimens, but neither of them are what you would call gifted thespians outside of their defacto tough guy roles. The rest of Dom’s team are given throwaway bits, though even with those meager offerings Tyrese Gibson (Transformers) comes close to wearing out his welcome as a nagging naysayer. The multiracial cast is so large that it makes it hard for any of them to actually develop as characters. Plus, this movie provides a matching evil cast that doubles the number of characters.

Ignoring all the dumb plot points and repetitious messages, when it comes time to unleash some top-draw action, that’s when Lin earns his mettle. The man has guided the franchise through four sequels ever since 2006’s Tokyo Drift, which dovetails with the timeline of this film in a surprising way (did you know these were prequels and not sequels?). I can forgive all the lapses in logic and physics when I get action sequences so good I don’t want to blink. The last two extended action set pieces in Fast and Furious 6 are stunners, massive, constantly evolving, and ridiculous in the best ways possible. The first is a freeway chase involving a tank and along a coastal Spanish highway high above cliffs. The phrase “freeway chase involving a tank” should immediately put a smile to your face. There is such over-the-top vehicular carnage, all along a trepidatious path, and the pacing just keeps things fully amped. The finale involves a giant military aircraft and a seemingly endless runway (seriously, this thing has to be like 80 miles long). Dom and his team are driving cars inside the plane, out of it, zipping around, snagging wings, being carried off with the plane; it’s a glorious sequence that involves multiple points of action, different team members, and develops organically while still escalating the awesome. Lin handles these sequences like a pro. I’m tempted to say that the greatness of these concluding action set pieces is reason enough to see Fast and Furious 6 in the theater on the big screen.

I’ve never really understood the appeal of Diesel (Babylon A.D.). I felt like I was asleep when it was decided that he had become a major action star. I don’t get it. The man grumbles just about every line of dialogue into an almost indecipherable growl. He also has the habit of getting very quiet when he’s supposed to be serious, thus making it even harder to understand what the guy is saying. I know at this point Diesel is a package deal with the franchise, but I wouldn’t mind if the far more charismatic Johnson (Pain and Gain) were to slide over and replace him as lead. Rodriguez (Battle: Los Angeles) seems to have a habit of dying in franchises and being resurrected (see: TV’s Lost, Resident Evil 5). The rest of the franchise players do their parts well enough with what little they have. Evans (Immortals) makes for a suitable sneering if forgettable villain. My favorite new actor is Gina Carano (Haywire), not necessarily because she’s a great actress, though she’s better than you’d think for an MMA-fighter-turned-actor, but because this woman is a born movie star. She’s got screen presence, a fierce look, and the lady does her own stunts. She is an impressive beast of an action star and hopefully somebody will get her the right project to make her break out big time (Haywire wasn’t it, folks).

While I prefer Fast Five, a more fun flick where the team play their parts in a convoluted but entertaining heist, Fast and Furious 6 is a highly enjoyable summer movie with some top-class action sequences. This franchise is the epitome of the popcorn thriller, its vaunting heights of ridiculousness also its most laudable quality. Six movies in, I imagine most moviegoers know what they’re getting with this franchise and they must like it because every sequel seems to outperform the last at the box-office. The formula of fast cars, sexy ladies, and hyperactive action make for a surefire, turn-off-your-brain summer spectacle. Lin has a real knack for directing large-scale destruction that’s easy to follow and easy to get caught up in. He has a strong tentpole mentality and I imagine he will be tapped to helm some other big-budget action picture. Whatever it is, his involvement guarantees my interest. I don’t know about Fast and Furious 7, scheduled to come out speedily next summer. Lin is being replaced by James Wan of horror fame, notably Saw and Insidious (his DePalma-esque work on 2007’s Death Sentence was actually striking). Considering Lin made one feature before jumping into Furious mode, a small indie crime drama, I won’t discount Wan’s potential, but I’ll miss Lin all the same. In the end, the director could be just as interchangeable as any other part of this franchise as long as it sticks to its tested formula and delivers the goods when it comes to ridiculous action.