The Jason Bourne spy series has been a financial wellspring for Universal studios, so when Matt Damon and director Paul Greengrass (United 93) decided they had enough spy capers and hijinks, you can understand the studio’s concern. They elevated Tony Gilroy, a writer from the beginning of the series, to director. Gilroy has done some well-received directing gigs of his own now (Michael Clayton), so his ascent made sense from a continuity standpoint. I did wonder how much liberty the studio was going to give him, whether he was going to be boxed in to a style that had worked for the series. I never knew I should have had bigger misgivings, namely that The Bourne Legacy would ransom its conclusion and force the audience to make Legacy a hit.

Apparently Jason Bourne wasn’t alone. The C.I.A. has a team of six different super agents, each undergoing rigorous training and chemical alterations to their DNA via a series of daily pills. Aaron Cross (Jeremy Renner) is out in the Alaskan wilderness when the C.I.A., led by Col. Eric Byer (Ed Norton) and Adm. Mark Turso (Stacy Keach), burn all their agents. They plan on starting over and that means eliminating all evidence of the spy program that gave birth to Bourne. That means Cross has to go as well. That also means the chemists and scientists working on the program must also be silenced permanently, and Dr. Marta Shearing (Rachel Weisz) narrowly escapes a workplace shooting. Cross seeks her out for her medical expertise. They both have a common enemy that wants them dead. Together, the duo heads over to Manila where Shearing’s company manufactures the super meds and so Cross can become a permanent super agent. 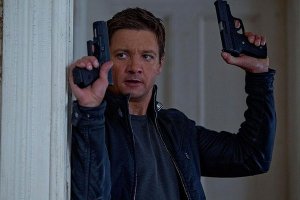 What the hell did I just watch? I know it’s labeled The Bourne Legacy. That part I get. What I don’t understand is that the filmmakers are trying to extort the viewing public into granting a Legacy sequel. Let’s cut to the chase. This movie has no ending. I don’t mean a bad ending. This movie is completely absent an ending. Not just an ending but also a third act. It’s like the filmmakers lopped off the third act and said, “If you want to see where this story ends up, you better get us a sequel.” There is no resolution for ANY STORYLINE in the entire movie. None. The good guys are still scrambling, figuring out how to blow the big bad conspiracy. The big bad conspiracy is still alive and kicking. The patsy for their wicked shenanigans is still the patsy. There is nothing that can be construed as an ending. At least the Damon Bourne movies each had a beginning, middle, and end and tied up their film plots. Sure the characters carried over and there were some larger, overarching storylines, but at least those movies felt complete. The Bourne Legacy is badly incomplete, a gaping void of a third act, and a blunder that makes me question the sanity of the filmmakers. How could you make a big budget summer action movie and not provide any semblance of closure? When the Moby tune kicked in on the soundtrack, I sat stunned, pinned to my seat in disbelief. “No, it can’t be over. They couldn’t possibly just end things here.” Oh, and they do. So enjoy 2/3 of a movie, folks.

With the anticlimactic end in mind, I now understand why the first hour felt so draggy. It’s because they had to fill out a two-hour running time. Especially for the Bourne franchise, the first hour seems to really be paced lackadaisically. For an action movie, it sure takes its time to get going. I wouldn’t have minded if I felt like we were setting up something exciting, but really the story is about a super agent who just wants to get his meds. He travels across the U.S. and the world so he can get his pills, and then he does, and then the movie abruptly ends. I’m simplifying matters in a crass way, I admit, but doesn’t this storyline just feel a tad slight? Legacy also starts to feel like a retread when it comes to its plot mechanics. The C.I.A. is burning all their super spy agents through suicide pills. They are destroying everything before Congressional oversight can reveal their true dastardly deeds. But then we need an antagonist, right? So the government goons reveal they have a SECOND even more super secret program to train super assassins/spies (“It’s Treadstone without the inconsistencies”). How far are they going to take this? Is there going to be a third super duper ultra secret level of killer spies? It’s repeating the same steps the franchise has already taken, the expert spy vs. spy clashes, but now it’s starting to get silly in a way the franchise had previously avoided.

The action sequences are serviceable but they’re not any better than what the franchise has produced before. Cross has a few nifty escapes but nothing that reminds you of Jason Bourne’s sheer ingenuity. What other man can take down bad guys simply with a rolled up magazine or a book? Aaron Cross just can’t compete with that. The final motorcycle chase is nice but it just seems to be repeating the same danger with little variation. The best action sequence is actually a bit macabre. It involves a workplace shootout. To even call it an action sequence is a bit of a disservice since it’s actually a tense and horrific scenario that is coming eerily all too familiar in the news. Weisz’s character has to hide while her co-worker methodically guns down his fellow lab workers. Oh, and he also took off the door handles, making it dire for help from the outside to get inside. It’s a horrific sequence that’s played out to stomach-knotting levels of tension, as the dread slowly mounts and the pessimistic inevitability looms. Now, obviously Weisz was going to survive, as we know this, but the sequence still resonates with real, primal terror.

So what does The Bourne Legacy have going for it in its favor? Well the duo of Renner and Weisz is a pretty good pairing. Renner (The Hurt Locker) has been rolled out as the next thinking man’s action hero, and he finds interesting depth to his spy character in a rather routine plot. But he’s even better when he’s onscreen with Weisz (The Constant Gardener). There’s plenty of shouting matches and intensity but they have workable chemistry and Weisz’s character gets to be an essential part of the spy heroics rather than a tagalong. I cannot fault the actors for the film’s flaws.

I understand why the Universal suits felt like they needed to pump new blood into their lucrative Bourne franchise. After a while, an amnesiac super spy is going to hit a breaking point; he’s going to run out of essential memories to recall (Bourne 5: where Jason Bourne gets back the memory that he does not like Indian food). I like Renner and Weisz. I even like Tony Gilroy as a director. What I do not like is only getting 2/3 of a movie. Whose bright idea was it to just lop off the third act and provide no resolution? The ending is so unbelievably jarring, so staggeringly incompetent, that I have to dock this movie major points. I can’t say the ending out and out ruins the film considering I was only marginally liking it beforehand. The Bourne Legacy is proof that sometimes imitation is not the best substitute for ingenuity. Gilroy is no Greengrass. Cross is no Bourne. Legacy is no complete movie.