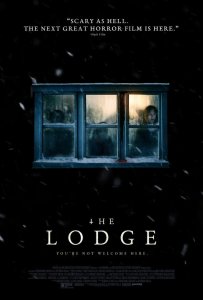 The Lodge is a patient, methodical, and unsettling horror movie that establishes an eerie atmosphere, pushes the viewer to question what is going on, and then, upon finally revealing its last secret, sits back and lets the real horror play out to sickening effect. This is from the same writing/directing team behind 2014’s Goodnight Mommy, and you’ll start to wonder whether or not Severin Fiala and Veronika Franz really dislike children. The movie had me on edge early with a sudden jolt of violence, and I felt uneasy from there to the bleak ending. It’s about a father (Richard Armitage) taking his two children for a holiday retreat with his new girlfriend, Grace (Riley Keough), the person the kids blame for breaking up their parents’ marriage. She wants to get to know them and bond but the kids are having none of that. To make matters worse, the kids discover that Grace is the lone survivor of a religious suicide cult. Once at the family lodge in the snowy woods, strange events and messages torment Grace and the kids until they question where they are, what may have happened to them, and if there is an escape. The first act is the family in the wake of trauma and the children viewing Grace as the interloper worthy of their scorn. The second act becomes an existential horror movie that questions whether there has been a shift into the supernatural or divine. The last act reveals what’s really been going on and it’s the consequences of bad choices. The ending trajectory feels fated from the earlier setups, so when everything is falling apart, the danger feels incredibly real. I was so anxious during the ending sequences that I was holding my breath and covering my face. I didn’t know how far this movie would go, and while it pulls back at the very end, the implications are clear even if they aren’t explicit onscreen. Keough (Logan Lucky) plays a character with real depth as a woman trying to reclaim her life from deep-seated trauma, and when events spin out of control, that trauma resurfaces and starts to take over her thinking, placing her on autopilot, which then pushes the film into the realm of tragedy. She’s fabulous and impressively restrained as her character mines layers of self-doubt, bone-deep teachings, and shock. The atmosphere of the film is very fitting for the setting, chilly and isolated and dread-filled. The camera movements are often very deliberate to draw out tension and uncertainty. It all comes together for a very creepy little movie that gets under your skin. The Lodge is not going to be an audience-friendly outing due to its pacing and ending, but consider it an A24 horror film that somehow got away under a different studio.