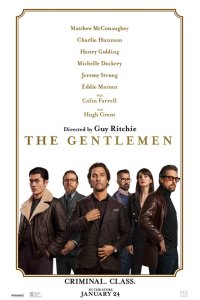 I’ve been hoping, wishing, praying for Guy Ritchie to return back to his screwball Cockney crime pictures of his splashy beginning, but the further and further I get from 2001’s Snatch, the more I think it’s a luxuriously madcap exception. The Gentlemen is a closer return to form than 2008’s RocknRolla, but it’s still a long way off from early Ritchie. The recognizable elements are there, from the convoluted story with twists and turns, the non-linear storytelling lapping and overlapping itself, the comical brushes with sudden violence, the colorful array of criminal characters, and a sense of style that seems all over the place. We follow Matthew McConaughey as a marijuana titan looking to get out of the business, though there are threats old, new, and “just business” that are trying to take his empire from him before his exit. The biggest problem with The Gentlemen is how clever it feels like it needs to be and how few characters there are to find interesting. Snatch, by contrast, forever contrast, was practically a Dick Tracy rogues gallery of all its memorable and unpredictable characters. These feel pretty rote, even our heroes, and the minority characters get even shorter shrift. The plot is also more complicated than it needs to be with an extended meta-textual layer of a lecherous Hugh Grant tabloid journalist pitching the story like it was a movie (irony: it is a movie!). It took maybe 45 minutes before I felt like the story was finally picking up momentum and stakes, and by the end, it felt like Ritchie was just extending his story with another twist and wrap-up, and then another twist and wrap-up, like the outer edges of the movie cannot be contained and somehow it’s still even going. It’s like Ritchie doesn’t know when to walk away from his own party. Because of these things the pacing is wonky and there are more than a few tedious stretches. Colin Farrell has some amusing moments but should have been the main character as a boxing trainer who takes a shine to try and reform local hoodlums. McConaughey’s character is too boring and always wins too easily, which makes him more boring. The Gentlemen is a C-level rendition of Ritchie’s best material, and Snatch only shines even brighter with each new miss.