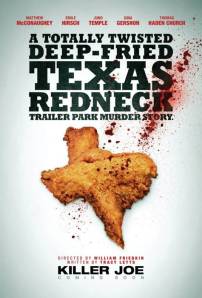 This is one nasty, alarming, but very involving movie that wallows in darkness and plays it up for laughs. Killer Joe is a dysfunctional family drama, a crime thriller, and a mesmerizing character study when it comes to the lessons of amorality. Based on the play by Tracy Letts (August: Osage County), Joe (Matthew McConaughey) is a crooked cop who works as an assassin on the side. A weasely loser (Emile Hirsch) and his family hire Joe to kill their mother for the insurance money. Things get out of hand in frequent measure, with splashes of brutal violence, healthy amounts of sex and full-frontal nudity, and a disturbing sexual act with chicken that more than earn this film its adults-only NC-17 rating. What makes the movie rise above base exploitation is its depraved, deep-fried sense of humor. There is plenty of uncomfortable laughter and guffaws. The end of the film, during a fever-pitch of violence, is so sudden, so kooky, so debauched, that my friend and I burst out laughing. Without its wicked sense of humor, and its sharp ear for working-class dialogue, the movie could be accused of wallowing in the muck. There’s also the terrific acting, chiefly from McConaughey. He gives a hypnotic performance, chilling, unpredictable, and deeply committed to retribution. When he zeroes his cold eyes on you, boy does the flesh crawl. It’s an intense performance and arguably the best of the man’s career. Directed by William Friedkin (who also directed the 2006 adaptation of Letts’ play, Bug) with brutish élan, Killer Joe is one nasty piece of work, but given the right audience, it could prove to be a perverse entertainment.