Miranda July is a writer/performance artist/filmmaker whose unique voice earns as many praises of “precocious” as it does hails of “pretentious.” Her previous effort, 2005’s Me and You and Everyone We Know, had such oddities as a group of cars creating a caravan to save a goldfish left atop one’s roof and children engaging in online sex chat over sharing feces from behind to another ( ))<>(( is the visual articulation of this function). Yeah.

With her second feature film, The Future, we follow Sophie (July) and Jason (Hamish Linklater), a couple who decide to adopt an injured cat they find. Named Paw-Paw by Sophie, they must wait 30 days for the medical checks to clear before they can pick up the cat. They believe that they are doing a kindness and giving the cat a good place to live in its last month of life. Then the vet informs them that if bonded, the cat could live an additional five years. Sophie and Jason will be 40 in another five years, and this realization stops them cold in their tracks. Both are unhappy with their lives, he works as a technical help guru and she teaches dance to preschool-aged children. They decide that for the next 30 days they will reinvent themselves. They will take the road less traveled and see where it takes them. Jason volunteers to be an environmental solicitor on a whim. Sophie wants to do 30 dances in 30 days but is crippled by fear. She reaches out to Marshall (David Warshofsky), an older single dad who proves to be a source of unlikely temptation. Along the way to the conclusion of those 30 days, Jason will utilize his abilities to stop time, speak with the moon, an old T-shirt will crawl will come alive, and the story will be narrated at turns by Paw-Paw. 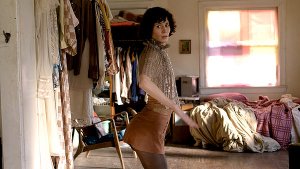 It should be obvious at this point that July is not going to be everyone’s taste. You could just as well furrow your brow at all these pseudo-intellectual bohemian artsy smartsy pretensions and make snide remarks under your breath. And I can’t say I’d blame you at points. However, if you happen to catch a ride on July’s funky wavelengths, then The Future becomes a poignant, observant, and occasionally profound rumination on human connection. July’s two main characters encounter a full crisis of self, fearing that their lives will essentially be over upon turning 35, which they reason is almost 40, which is practically 50, and all that back-half stuff is “loose change” (not enough to really get what you want). I believe I heard none other than Jessica Simpson herself utter a similar statement on her ill-fated Newlyweds reality TV show. She said, “I’m turning 23, which is practically 25, which is almost 30.” Perhaps Ms. July was also watching that episode, and if so this will be the only time in print that I congratulate Jessica Simpson for anything. This manufactured anxiety over doing something of worth and lasting value with your time on this planet is nothing new but it is deeply relatable, despite the silly numbers game the characters endure. It’s a paralyzing existential doubt. Who doesn’t want to feel like their life had purpose? You only get one. July makes a series of observant comments about human interaction. For their life project, Sophie decides to cancel the couple’s Internet connection. They have but moments, perhaps seconds left, before the Internet is lost to them for 30 days, and they scramble to open their laptops to do important stuff. “Only look up stuff we can’t find in books or by talking to people,” Jason intones. Slowly, both of them come to the same realization and close their laptops. It’s a silent admission that the technology we feel dependant upon might not be so.

There’s a striking clarity when an artist cuts through everything and finds something dwelling inside your grey matter. For me, July is that kind of artist. I loved a sequence where Sophie, out of slumming desperation, takes a job as a receptionist back at her old work place. One day two of her female friends come into the studio. Both women are several months pregnant, and Sophie is aghast that she let time get the better of her. She keeps shaking her head, rationalizing that it must have only been a couple weeks since last she saw her friends. Then through a series of edits, we witness a fantastic fantasy that highlights Sophie’s abject feelings of accomplishing little while time flies by. Every time the camera cuts back to the friends more time passes; we see them hold newborn babies, then we see those babies as kids, then as young adults, and finally as adults who themselves have married each other and wish to enroll their own daughter into pre-dance. They inform Sophie that their mothers passed some time ago. And all the while, Sophie is still in her dead-end job. It’s a terrific scene that highlights the anxiety we all feel about being lead footed in life, watching others skirt by and negatively assessing our own personal journeys by someone else’s accomplishments. The Future is full of moments like this that hit so hard you feel like the ground beneath you has vanished. Jason’s refusal to restart time is painfully identifiable, the wish to stay frozen in time to defer facing the hard pains of a breakup, the rueful knowledge that life will be forever different, and worse, in the passing of a second. The future can be a painful place we’d all like to hide under the covers and avoid.

Like July’s previous film, The Future is more a series of encapsulated vignettes, each with their own peculiarities, than a fully formed coherent story. While I enjoyed the separate vignettes better in Me and You, the overall story congeals better in The Future even if the results are messy. This is a less romantic and hopeful film than Me and You. It’s much more ambiguous (that’s saying something) and bleak when it exposes the missed chances that can haunt, none more so than Paw-Paw, our bandaged feline narrator. Scurry to the next paragraph if you’d like this part unspoiled for you, sensitive animal-loving readers. Paw-Paw speaks about her new sense of happiness, about having owners that will be kind to her, and this new sense of belonging fills the cat with a ballooning hope that her real life has finally begun. But then Paw-Paw doesn’t make it. She dies a day before either Sophie or Jason comes by to pick her up. But the cruel irony is that Sophie and Jason missed picking up their cat/metaphor of their relationship on its release date. Paw-Paw could have spent her last day on earth with the people she had yearned to be with, the people she wrote an imaginary letter to telling them how grateful she was and how much she promised to love them. Instead, the cat dies, forever waiting. That’s pretty rough, and even though July’s scratchy, high-pitched Paw-Paw voice can be annoying, God help me if the pet lover in me wasn’t in tears every time this damn cat was narrating, including after its death. That’s the kind of film The Future offers. It does not dish out easy answers for life’s Big Questions. Even as the end credits roll, you’re left to ponder whether you believe that Sophie and Jason will reconcile.

July, resembling a cross between Kristen Schaal (Dinner for Schmucks) and Juliette Binoche (The English Patient), is probably also her biggest hindrance. She’s not that developed as an actress, or is being purposely opaque, and thus Sophie seems to be lost in a medicated fog. This was less of a problem with Me and You because the ensemble was larger. Here, it’s mainly three actors. July delivers every line in a flat style that makes her character harder to decipher and harder to empathize with when she goes off into her affair. The entire storyline with the sign making “other man” is kept at a mystery. We’re not really sure why Sophie would be attracted to this man or what problems are ailing her relationship with Jason. I suppose the early mid-life crisis could serve as a fire to get Sophie to reach out to someone who offers more security, but that’s merely my best estimation. It’s a detour that could use more attention to explain its significance. I suppose it could be July’s version of a romantic comedy staple of being with the wrong man and finding out late your mistake. It’ll be up to the viewer which guy fills the role of “wrong man.” Luckily, Linklater (TV’s New Adventures of Old Christine) is a winning presence, affable without being offbeat and striving for meaning without coming across as pompous.

Whether it’s a dance inside an oversized T-shirt or choosing a song to communicate undying love in the event of amnesia, The Future is chockablock with memorable moments, images, insights, and peculiarities. Whether all of that comes together into a fully realized movie is another matter. The scattershot nature and July’s own acting shortcomings clip the film’s momentum, but the uniqueness of voice and observant vision of July as writer/director makes me forgive much of The Future’s faults. It’s not exactly an easy sell of a movie, especially to concerned pet lovers, but July is one of those polarizing artists I’m glad finds the time to empty their brain every now and then. I may not fully understand everything but The Future held enough promise for me to leave feeling satisfied.