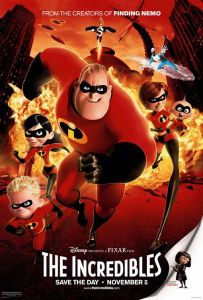 You’ve been there before. You know the drill. You’re staring up, mouth agape, at the multiplex’s list of new titles wondering what to see. It happens to the best of us. Who can you trust in these situations? Most people used to think they could trust Tom Hanks, but after his accent experimentation in The Ladykillers and The Terminal, not to mention his giant creepy mustache in The Polar Express (with accents!), that train of trust might have left the station. A lot of people felt they could trust an Oliver Stone movie, and, well, look how that turned out. No, moviegoers, the only trustworthy name that won’t let you down is Pixar. With hits like Toy Story and Finding Nemo you know that those computer wizards are looking out for you. Their newest work, The Incredibles, will keep Pixar alive in the moviegoer circle of trust.

The Incredibles takes place in a world where superheroes walk, run, jump in single bounds, and zip through the sky. They’re beloved and revered, with the super-strong Mr. Incredible (Craig T. Nelson) at the head of the pack. But then a fiend strikes more powerful than any dreaded super villain: litigation. A mountain of lawsuits pile up against superheroes, and the government disbands its programs and relocates all super-abled beings into new identities and homes.

Fifteen years later, Bob Parr, a.k.a. Mr. Incredible, has married Helen (Holly Hunter), a.k.a. Elastigirl, who can stretch her shape, which comes in handy keeping their two children in line. Dash (Spencer Fox) begs his parents to allow him to use his power of super speed, especially at his schools sports. Violet (Sarah Vowell), all long haired Goth angst, uses her power of invisibility to just disappear during school and other functions she feels she doesn’t fit. It seems the only member of the family fully adjusted and happy to a “normal” life is Jack Jack, the Parr’s infant son who may or may not develop super powers of his own. Bob feels crushed by the grind of office work and hiding what makes him and his family special. He escapes at nights with old friend Frozone (Samuel L. Jackson) and the two of them relive the good old days with attempted heroic acts. Helen catches on and they have a huge fight with the kids as witnesses. Helen explains to her family in the best way that she can that their days as superheroes are over. They have to adjust to a different life now.

Bob’s wanderlust is soon quenched when he receives a mysterious invitation from a beautiful, white-haired woman named Mirage. She offers Bob the chance to become Mr. Incredible once more, to use his gifts and abilities to stop a robot on the loose on some island. Bob leaps at the chance, hiding his ongoing super exploits from his wife, and regains a sense of purpose. He hasn’t been this happy in ages; however, it all comes to a head when he learns that Syndrome (Jason Lee), the one responsible for the run-amok robots, has other plans. Not only this, upon capture Mr. Incredible realizes that he has ties to Syndrome way back during one of his less-than-super moments.

Helen is shocked when she finds out what Bob’s been up to, but also partially relieved it’s not an affair. She visits their old costumer Edna Mode, whose glasses and black wig may be bigger than the rest of her shrimpy body. Edna has redesigned a team of superhero costumes, and with them in hand Helen becomes Elastigirl once more and takes Dash and Violet on a journey to save their father and become a family once more.

The Incredibles is a film bursting with entertainment. This is an explosion of imagination, of wit, of grand storytelling, that the audience should sit and soak up every loving and beautiful second of it.

The voice work is wonderful. I’m sure Disney execs were scratching their heads over Craig T. Nelson, but I cannot imagine anyone else that could deliver as much in the role. Hunter is excellent, as always, as a doting mother and crime fighter. Lee is great with a villainous role that has a lot more depth to it than near any live-action film. His verbal gymnastics are perfectly suited for a slighted super villain.

Writer/Director Brad Bird’s first feature was the 1999 masterpiece, The Iron Giant, which I consider the finest animated film of all time (you heard me, Walt). Bird’s first film was a masterful mixture of little boy fantasy, reality, strong characters, humor, and excuse-me-there’s-something-in-my-eye tenderness. I know many people who, after seeing The Iron Giant, say they were, “crying like they watched a puppy get hit in the face with a shovel.” 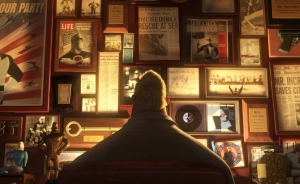 With this being said, my trust in Bird as a master storyteller is still there. The Incredibles is the first Pixar film concerning real people, not just toys, ants, fish, monsters, and, uh, more toys, and the results are astounding. This is a film rich in complexity, human insights, family warmth, and, again, realism. Bird has fully realized The Brady Bunch of superheroes. They feel just as flesh and blood as any characters I’ve seen in any film this year. They have desires, secrets, shame, guilt, anger, burdens, pride, and above all, love. I mean, how many animated films have an actual subplot involving marital suspicion? You won’t find that in The SpongeBob Squarepants Movie. When Elastigirl and the kids go off to save her heroic hubby, she has a sit-down with her children and warns them that, yes, death is very real, and that these people will indeed kill them if discovered (this is the first PG-rated Pixar film, by the way). It’s a great moment that reminds you how much you care for these people.

Bird’s imagination seems incomparable. He has a razor-sharp feel for comedy, like Elastigirl’s scene caught between several sliding doors or the lively, hysterical Edna Mode personality, but he also possesses the ingenuity for crafting some of the most exciting action sequences in a long time. The Incredibles has uncanny action scenes, set to Michael Giacchino (TV’s Lost) blazing jazz score, which should make the James Bond producers die from envy.

Bird has created a stupendous action film, a heartwarming family drama, a hilarious comedy, and a gorgeous film to watch. Movies rarely get this entertaining, but for Pixar, it’s all just part of the norm. I hope someday we don’t take Pixar’s accomplishments and staunch consistency for granted, because they aren’t just reinventing what animation can do, they’re also reinventing what films themselves can do. You can have all the accents you want Tom Hanks; I’ll gladly take The Incredibles and its bounty of offerings.