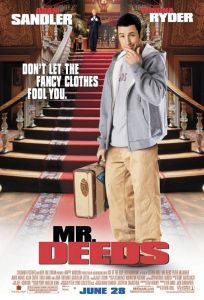 Adam Sandler seems like the reason they created the “no shirt no shoes” policy for restaurants. His niche is playing the lovable goodhearted goofball that triumph over the pretentious jackass and somehow wins the heart of the fawning one-dimensional love interest. Sandler appeals to the masses as our nation’s greatest warm-hearted simpleton. He’s the Jimmy Stewart of slobbery. So why mess with that? Well for starters, if you want entertainment anymore you might want to.

Mr. Deeds, Sandler’s latest idiot opus, is disastrously, even tragically unfunny. In the film Sandler stars as the only known heir of a multi-billionaire media mogul. Longfellow Deeds (Sandler) is a simple New Hampshire pizza delivery boy who treats people with respect and kindness. However, the mantra cruel to be kind must be alive and well because Sandler mercilessly beats people to about an inch of their life throughout Mr. Deeds for brutish comic effect.

Peter Gallagher and his monstrous eyebrows serve as the stand-in villain. Hes a greedy tycoon who wants the Deeds fortune all to himself. Gallagher actually plays his part well and seems to at least have some fun with the broad comedy role. Wynona Ryder, on the other hand, does not. Ryder has never proven she can handle any comedy other than black, and slapstick just ain’t her thing. She painfully goes from scene to scene clueless as a tabloid journalist hiding her identity so she can get the scoop on Deeds, only to fall madly in love with him.

The film has some glimmers of comedy, mostly from its supporting cast including John Turturro as a very sneaky Spanish butler. It’s nice to see Turturro in something this high profile and get some recognition this journeyman deserves. There’s also a really funny cameo served up by a former tennis giant himself known for his boorish temperament. Steve Buscemi should be charged with grand theft movie because his three minutes on screen as the crazy-eyed local are funnier than anything with Sandler onscreen.

The movie becomes far too redundant of Sandler’s other comedies to the point where seeing former stars like Rob Schneider in his Big Daddy character is somehow supposed to be funny. This kind of stuff is strewn throughout the film. It feels like everyone’s going through the motions. Now I’m not a total Sandler basher, because I do believe the man can be funny when worked right. Billy Madison is still hysterical to me upon every viewing and I do get some fun watching The Wedding Singer, but Mr. Deeds is sub-par Sandler even for Sandler.

I’m sure most of the people buying tickets for this have no idea that the concept is based upon the Capra film starring Gary Cooper. But what good is Gary Cooper? He didn’t write cutesy greeting cards or save a litter of kittens from a raging inferno like Sandler’s Deeds. In the end, this mostly laugh-free comedy is short on imagination, energy and entertainment.