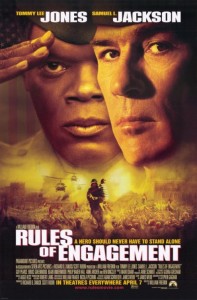 Samuel L. Jackson and Tommy Lee Jones are old war pals who took separate paths after a cataclysmic ambush in Vietnam. Jackson went on to a prestigious career in combat but Jones was restricted to desk jobs the rest of his tenure. It appears Arabs are at their old tricks again, being that without Nazis or Communists they are Hollywood’s favorite misrepresented bad guys. Jackson gets dispatched to protect a U.S. embassy besieged by protests. During the melee of confusion Jackson orders fire on the crowds outside. Now he has to face the ramifications which include murder charges and a tangled web of conspiracy.

Jackson gives an electric performance as the Marine Captain full of sound and fury. Jones and Jackson exhibit great chemistry together under William Friedkin’s deft hand. Friedkin, known for classics like The French Connection and The Exorcist, whose last pic was Jade, has crafted exciting sequences of action and suspense. The problem is they all happen early and the film unwinds and unspools as it continues.

Bruce Greenwood seems to be making a career out of beguiling Jones. In last fall’s Double Jeopardy he was a slimy not-so-dead hubby, and in Rules he’s a slimy National Security adviser. These two look like they’ll be the Ben and Matt of the over forty crowd.

Rules of Engagement is a courtroom action/drama that plays closely to the rules established but coasts on terrific performances from its leads and some dynamite action sequences. But eventually the weight of the plot drags Rules from the potential it flashed.