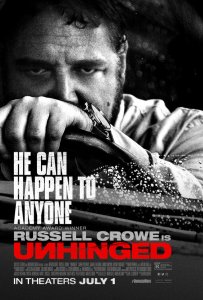 Russell Crowe (The Nice Guys) plays a deranged motorist with a serious case of road rage in Unhinged, an otherwise forgettable if competent thriller only notable for Crowe’s unnerving performance and as the first widespread movie in theaters after the COVID spring shuttering. It boggles my mind that enough people would rush out and risk personal safety to see this movie but I guess people can be desperate for a return to normalcy. In Unhinged, young mother Rachel (Caren Pistorius) is late dropping off her teen son to his school. She enrages Crowe in a traffic altercation and from there he plots her abject suffering for his twisted vengeance. Crowe’s character, simply labeled “Man,” is the wrong person to anger. The opening sequence involves him popping pills and then murdering his ex-wife and setting her new home ablaze. He’s an unstable psychopath who feels wronged by women and looking to hurt them for these perceived slights. He’s irredeemable, though the movie thinks it’s making him more “complex” with its slapdash attempts at back-story. The problem here is that Crowe’s antagonist is too powerful and omnipresent and our protagonist keeps making stupid decision after stupid decision. Even after her friends and family are threatened, or worse, she doesn’t seem to be making smart decisions, like involving the police or reaching for help. There’s a contrived reason to rob her of her cell phone but then she just gets a different phone, so why even bother? Even as she’s being hunted down by a guy who is sweating toxic masculinity, it can be strangely hard to root for Rachel because of the annoying bad decision-making. Also, her own back-story is weak. She’s going through a divorce and also might be bad at meeting deadlines, which relates to what later? The thriller sequences are serviceable but uninspired. Crowe is the only real reason you should watch Unhinged. He could have gone on auto-pilot for a standard paycheck psycho villain role and instead becomes truly terrifying, settling into a twangy American accent and leaving you wondering when his anger will snap. He’s at his scariest when he’s trying to sound reasonable or thinks he’s sounding reasonable. There’s a strange coda where Rachel withholds honking her horn after she almost gets run into by a speeding driver. The movie treats the concluding moment like a learned lesson but it feels more like bizarre victim shaming. She should have honked her horn at this driver, who was in the wrong, and she deserved to honk her horn originally with “The Man” for his vehicular infraction. She shouldn’t have to withhold her response out of fear that he other driver might overreact and seek out her friends and family and murder them. What a strange lesson for Unhinged to be imparting for its audience.