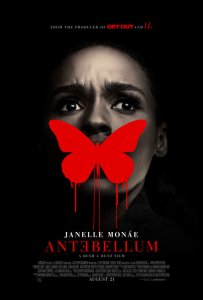 Antebellum was originally supposed to come out in the spring and yet it only feels even more relevant today in the wake of months of protests over police brutality, the removal of Confederate monuments, and whether or not black Americans can attain justice in an imperfect system. Antebellum has also been flagged with overly negative reviews and accusations of being just another movie that exploits the horror of slavery for cheap thrills. After having seen the movie, I feel perplexed that so many of my critical brethren could not connect with the film and its finer points on the world we lived in and the world we live in today, inextricably linked.

Eden (Janelle Monae) is an enslaved woman surviving on an eighteenth-century Southern plantation run by Captain Jasper (Jack Huston) and the mistress of the land, Elizabeth (Jena Malone). Then there’s Veronica (Monae) who looks identical to Eden and lives in modern-day. She’s an author and academic speaker on social oppression and politics. How these two women are related, as well as past and present, will be revealed over the course of 100 minutes. 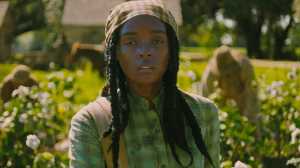 Antebellum is divided almost equally into 30-minute thirds, and it’s the structure that helps to aid in its mystery while also stiffling its larger implications. The first third is watching a plantation and the horrors of slavery; however, there are clues that something strange is happening. Little touches, character responses, a tattoo that seems too eerily modern. From there, we jump forward to the next third with what appears to be the same Eden, this time as a featured academic author. From here, if your mind is similar to mine, you’re attempting to bridge this connection and uncover how the past and present have become entwined. Is Veronica experiencing a deeply felt dream? Is it time travel? That was my guess before starting the film based upon the advertisement. I thought it was going to be a story about horrible racists from America’s past kidnapping black Americans to enslave. It’s a sci-fi angle that can make the material feel fresh, as there are more things to say other than the obvious and profound statements that “Slavery was terrible,” and, “It should never be forgotten or mitigated of its horror.” I also think it would serve as a rebuttal to those who ignorantly argue, “It was so long ago, why does it still matter? Get over it.” The past, in that instance, is literally ensnaring the present and forcing citizens to relive generational trauma. It’s that final third where Antebellum reveals what it really has been all along, and it’s a surprise but it also makes sense in the world that its meant to represent, leaning into a contemptible degree of human avarice that reminded me of HBO’s Westworld. It’s a fitting revelation and, as one would expect, the final third charges into an emotional catharsis as we watch Eden/Veronica fight for her freedom at last.

However, and this is a word I can already tell I’m going back to repeatedly to qualify my reservations, once the Big Reveal is known I wish we could have spent far more time dwelling in the implications of what exactly it means. I won’t spoil what exactly that reveal is but it’s definitely something that has plenty of social and political commentary and a reflection of our modern times and the injustices that have only been further highlighted this year. It’s such an interesting angle that I almost wish the filmmakers had re-prioritized their movie. Rather than structuring to best serve a mystery with a Shyamalan-style twist, it could have had its Act Two break be its inciting incident, revealing its twist as the starting point for the real terror. As a viewer, while I enjoyed the mystery and portentous mood of the movie, it presents a potent storytelling avenue that is far more compelling than the first two-thirds, but by then it’s too late. It works as context for the behavior and setting we’ve seen, both past and present, but Antebellum strangely suffers from trying to be too clever when a more straightforward version could have better tapped into its full dramatic and political commentary potential. 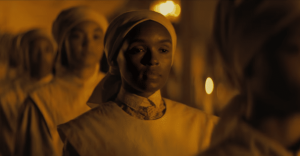 I was intrigued early on and came away genuinely impressed with the technical skills of debut writer/directors Gerard Bush and Christopher Renz. The photography is often stunning and that goes for their visual compositions as well as their specific camera movements. The opening scene involves a tracking shot that starts from the front of the plantation facade, and that’s the best word, all prim and proper and beatific in appearance, before swooping behind and into the slave quarters to see the ugly reality behind that illusion. I didn’t feel like the filmmakers were simply using the backdrop of slavery as cheap genre exploitation. I felt their intentions were good. The horror of slavery isn’t downplayed but it’s also not overtly recreated just to add an easy splash of violence or terror. The movie relies more on implications, like Eden sleeping next to the plantation owner every night or an enslaved man finding his wife’s necklace in a charnel house among a scattering of ashes. The implication of the larger horror is there without having to be explicit. I’m reminded of the abrasively negative condemnations of Netflix’s Cuties insofar as people seemed to be missing obvious artistic intent. These are challenging and uncomfortable movies but movies with something to say, and Antebellum is not just a simple rehash of slavery tropes to turn black people’s historical suffering into slapdash slasher pulp.

Monae (Hidden Figures) is strong throughout and continues to build her case as a leading lady. She must register her fear in subtle ways without going into larger histrionics, but she maintains a quiet strength that keeps your eyes glued to the screen. Her time spent in the present, as the author calling out aging racist ideology, is bold and confidant and serves as a counterpoint to the woman we’ve experienced on the plantation. We know that woman is still inside Eden. Monae has a late scene set in slow-motion, with the music swelling, that simultaneously feels badass, uplifting, and like an American Valkyrie blazing against unchecked Confederate revisionism. 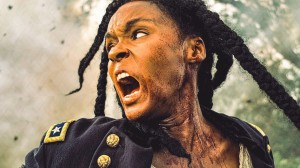 Antebellum is better than its reputation and offers more from an artistic standpoint than hitting the same points and rehashing the same traumas of the past. It’s a movie built around its mystery when I feel like it had much more it could have said with restructuring and more time spent after its final explanations. As a mysterious thriller, it’s tasteful, thematically involving, and technically impressive. It doesn’t even use the N-word once, which could be decried by some as unrealistic but also a sign of the filmmakers’ good faith to not merely use a shameful historical legacy for base titillation. It works as a thriller with more on its mind. However, and this is my last usage of that word, it’s that mind I was more intrigued by. Antebellum is a B-movie with A-level ambitions but a story structure that keeps it stuck as a well-polished B-movie.