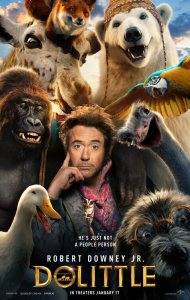 Here’s the revelation of the new year: I didn’t hate Dolittle. In fact, I kind of admire it and mostly enjoyed it. Given the advertising, bad buzz, and mountain of critical pans, I was expecting very little from this movie, so perhaps it chiefly benefited from dramatically lowered expectations, but I feel comfortable going on the record in the Dolittle fan club. Robert Downey Jr. stars as the magical vet and adventurer who can speak with animals, and for the first 15 minutes or so, I was laughing at this movie and shaking my head. There’s a moment where Dolittle, a gorilla that just showed its backside while playing chess, and a duck are laughing uproariously in their own languages, and the moment holds awkwardly and it was so weird. After 15 minutes, I began to adjust to the movie’s wavelength and I began to appreciate how committed to being weird the movie was. This is not exactly a movie that aims for a safe broad mass appeal, even though it has familiar messages of family, acceptance of loss, and confronting personal fears. It takes chances on alienating humor. You could take any incident from this movie, including its finale that literally involves disimpacting a dragon’s clogged bowels, and on paper, without context, it would be the dumbest thing you could imagine. However, when thrown into a movie that never takes itself seriously, that is actively, almost defiantly being weird (a joke about a whale flipping off humans with its fin made me cackle), the things you might mock take on a new charm. Director/co-writer Stephen Gaghan has worked in Hollywood for years and given the world Traffic and Syriana, so he knows his way around working within a studio system. Dolittle at times feels like a live-action Aardman movie with its anarchic spirit. Downey Jr. (Avengers: Endgame) bumbles and mumbles in a thick Welsh accent that he may regret but he’s fully committed. Michael Sheen (Good Omens) is a delight as a seafaring antagonist, and he knows exactly what kind of movie he’s part of. The animal CGI can be a little dodgy at times for a movie this expensive and not every jokey aside works but enough of them did to win me over. I’m under no illusions that a majority of people will just scoff at Dolittle and never give it a chance, and I thought I was ready to join their ranks, but then a funny thing happened when I sat down to watch the movie and accepted it on its own silly terms. I had fun, and I know there will be others that do as well. It may be a disaster to many but to me it’s a beautiful mess.