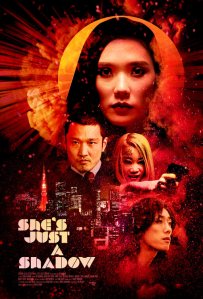 Film is a powerful medium but it’s also one where it seems an infinite number of people are ready and willing to debase themselves just to be part of a production, just like there seems to be an infinite amount of people ready and willing to use their perch as filmmaker to exploit, particularly, young women that normally wouldn’t give them the time of day. I don’t dislike exploitation cinema on its face. I enjoy crazy movies, bad movies, and movies replete with sex, drugs, and violence as much as the next guy. The problem is when the exploitation is for its own shallow sake. Such is the case with the repellent She’s Just a Shadow from writer/director/producer Adam Sherman, whose scuzzy aim seems to be a lower-rent Harmony Korine, who is a lower-rent Larry Clark, all face down in the trough of skeevy exploitation cinema runoff. This may be the kind of movie only a disaffected 12-year-old kid would love but you wouldn’t want to get to know that child.

Set amid the glamour and grime of Tokyo, we follow Irene (Tao Okamoto, The Wolverine), who informs us in her opening narration, “It was kind of confusing how I took over the black market and sex trade of the whole city.” So, off to a good start. She’s married to Red Hot (Kentez Asaka) who is looking to gain new turf for his drug empire and stomp the competition, which happens to be a grade school friend of Irene’s that causes him intense jealousy. Gaven (J-pop star Kihiro) is tired of his rich gangster playboy life and torn between his feelings for two prostitutes, Tanya (Karuka Abe, Kiss Me First) and Beth (Mercedes Maxwell, Marfa Girl). He wants to run away with Tanya but just can’t leave his cushy lifestyle. Really, the plot of this movie is: whatever character does copious amount of some drug while naked women cavort in foreground or background. Plus there’s a serial killer. That’s it. 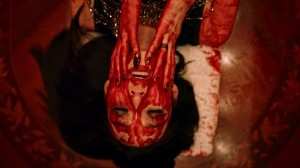 The opening sequence sets the tone for this repulsive TWO-HOUR experience. A woman is hogtied, naked, and laid onto train tracks. Her abductor records her panicked muffled cries as one of Japan’s bullet trains approaches. Yes, it’s a twenty-first century film where a villain straps women to railroad tracks. However, that’s not edgy enough, so the abductor proceeds to masturbate to the woman’s terror and climaxes on her, which we see, before she gets smacked by a train. It’s a gross, sleazy, and gratuitous opening, and it sets the tone for a movie that never challenges itself to be anything more than the world’s most boring exploitation film.

Exploitation movies trade in base behavior, memorably outrageous characters, and fans celebrate them for it, but they still need to provide an entry point for an audience. She’s Just a Shadow is trying so hard to be edgy in every scene that it reeks of tragic desperation. It’s unrepentantly misogynistic and trashy and ugly and cruel for its own stupid sake. There are no characters of interest, no recognizable people to follow and empathize with, and Sherman’s idea of a Strong Woman amounts to an abused woman forced to do awful things to fit in or rise above awful people. Crime movies and exploitation cinema is rife with immoral characters but the filmmakers know well enough to make them worth watching. With She’s Just a Shadow, one of the biggest character’s entire arc is that he keeps saying, “Man, I can’t party anymore.” He has a life of empty luxury and he says he can’t handle it any longer, and yet he stays. The lead characters are supposed to be ferocious criminal leaders but they act like self-involved morons or cartoons. They have (nick?) names like Red Hot, Knockout, and the competing gangster, Blue Sky. There is one moment that is so incomprehensible in its insane nihilism that I was gob smacked. In the span of ten seconds, a character roundhouse kicks a kid in a wheelchair across his face, then punts his dog over a fence, and then gets plowed into by a speeding truck. If you needed confirmation, here it is that Sherman has contempt for his unfortunate characters.

The heavy-handed nihilism is so tiresome and is its only trick. Sherman is forced to resort to repetitive shock theatrics to jolt life into his movie because it’s such a floundering story. There’s one scene where Tanya is eating an ice cream cone, digresses about how her drunk father was so poor he could not even afford an ice cream cone, then discusses how she was possibly molested and raped by that same father, and now he’s dead, mom too, and then she smears the vanilla ice creams over her face and asks, “Will you lick the ice cream off my face?” Then there are close-ups of Gavin’s tongue lapping every morsel. What the hell is this scene even doing?

The lingering serial killer is the biggest symptom of this diseased thinking. The “Train Track Killer” is seen murdering a half a dozen naked women in his signature over-the-top style, and why do we need to see this half a dozen times? Are we gaining any further insights about this man? The police can’t seem to determine the identity of the culprit, but in this universe not a single train employee or passenger records evidence of a weird man standing beside a dead body. The serial killer poses as a cop but most of his screen time is spent spying on Irene’s prostitutes, and hacking into their electronic devices, and masturbating furiously. I suppose there’s a mystery of whom he is, not that his identity matters, but it does matter to Irene and her girls who are at risk. Halfway through the movie, Irene knows who this guy is and… she… does… nothing. Why? Eventually, at the very end of the movie, she does take a stand, but why didn’t she take the initiative an hour earlier? There are more women dead because she chose not to act. The “Train Track Killer” adds nothing of genuine value to this story. He’s a slipshod antagonist kept along the periphery, called upon to do something horrible at random times, yet his actions have no impact on the characters he targets. Under Sherman’s guise, the women are all disposable. This is a stupid character that has nothing to do except provide work for the newscasters (who report with the same microphone and obliviously within feet of speeding trains). Let this terrible man’s spiteful ejaculation in the opening scene serve as a metaphor for the entire enterprise. 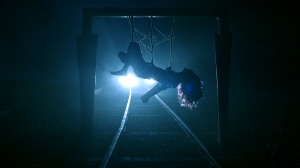 She’s Just a Shadow has so many bizarre, ineffective, and pathetic examples of headache-inducing dialogue that I had to assemble my favorites. I asked my friends on social media what the best-worst example of dialogue is, and by a close margin they went with the first selection. The candidates for Worst Line of Movie Dialogue of 2019 are the following:

1) “Women! No matter how human they seem, they are just shadows. But on the other hand, aren’t we all?”

2) “This sandwich is cold and raw AND SO ARE YOU!” *hangs up phone*

3) “There’s two kinds of love: strawberry love and Twinkie love. A Twinkie can sit there for decades and still be sweet. A strawberry is juicy and sweet but if you leave it out it will rot in just a couple of days.”
“Only a prostitute would say that.”

The production has some merit when it comes to its Grand Guignol primary-color drenched photography, but anything of technical value is quickly extinguished by Sherman’s unrestrained penchant for gratuity. Even if you enjoy some of the visual arrangements, there will be scenes where it feels like they were running out of time and just threw a camera onto a tripod and got the first take. Even if you like some of the style, Sherman will indulge to the point of self-parody. There’s one moment where Irene’s girl gang and a rival gang standoff and Sherman has 14 seconds of shots of characters just drawing their guns (I actually counted) and no seconds of watching the actual shootout (the camera frustratingly pans away to hear the off-screen gunfire). Let that be an example of Sherman’s predilections and priorities, featuring women posturing in his fetish gear but, when it comes time for there to be stakes and story significance, the movie cowardly retreats. I haven’t even talked about the numerous other awkward moments. Red Hot rapes Irene twice, once after spanking her/beating her with a laptop, and a second time after stabbing her in the thigh. Gaven badgers a dying and profusely bleeding prostitute (it’s like the floor is painted in gory gallons) about whether or not she can see God in her final moments, and she requests a kiss that is followed through with a string of bloody saliva between their lips. The earlier shot didn’t even have this string of saliva, but then Sherman shows another take immediately after, because he definitely wants this string of saliva seen and processed. It means something. Or nothing. 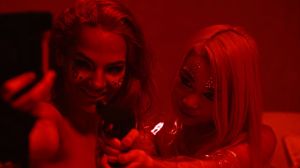 To say She’s Just a Shadow is in bad taste or a waste of anyone’s time is an obvious understatement. This is a bottom-scraping bad time of a movie, soaked in various bodily fluids, gruesome for the sake of being cool, smothered by its wanton excess, and supported by one-dimensional ideas of characters that are really just opposable bodies miming the exploitation influences for Sherman. He feels disdain for all of these characters but especially the women who are fetishized, objectified, abused and harassed, and made to sadistically suffer. I felt bad for every person, especially the women, involved in what feels like Sherman’s student film project where he gets to tickle every personal fetish he’s ever had. Even watching the stream of flesh and violence grows utterly tiresome without variance or reasons. At one point, a call girl stumbles into a double suicide, blood splattered against the walls, and seems to be talking directly to the audience when she huffs, “This is the stupidest fucking thing I’ve ever seen.” You said it, sister.