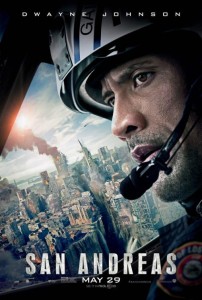 Sometimes all you want with a movie, especially a disaster movie, is some good dumb fun, and sometimes that fun is a little too dumb. Such is the case with San Andreas, chronicling massive earthquakes shredding California. After a slightly clever opening, the film goes rapidly downhill as we’re stuck with one-note stock characters. The Rock and Carla Gugino as a divorced couple who will, naturally, be brought back together over the course of events. They also have to travel to San Francisco to save their daughter (True Detective’s GIF-exploding Alexandra Daddario). I have to admit, that is one hell of an attractive family. There is no loser in that gene pool. From an action standpoint, San Andreas does a serviceable enough job with a few memorable images of Mother Nature’s fury. The script is definitely an excuse to just get from one big falling thing to another. I’m not expecting Shakespeare but the story shows very little effort. Oh no, the record-breaking earthquake is going to broken by another newer record-breaking earthquake. Oh no, a small child is huddling in a corner and needs to be saved. Oh no, a character is deprived of oxygen for like five minutes onscreen but magically comes back to life. If that doesn’t cause brain damage this script will. One of the problems with San Andreas is that it doesn’t have any real disposable characters. These kinds of movies thrive on having meat for the grinder, but from the first act onwards there’s nobody we truly fear will bite the dust. There was one major missed opportunity: the cowardly step-father (Ioan Gruffudd) abandons others, narrowly escapes disaster, and he should have continued doing so, avoiding another near-certain demise just to intensify the audience’s demand for his end. It would have been a satisfying payoff. Oh well. San Andreas starts to become a lot of hollow PG-13 carnage. Watching this gave me a further appreciation for Roland Emmerich (2012, Day After Tomorrow), who has such a better handle on large-scale destruction. That man knows how to make good dumb fun disaster movies peppered with all sorts of visually arresting images. If you’re desperate for disaster, you could do worse than San Andreas and its onslaught of CGI thrills, but you could certainly do better.