Uwe Boll does a Vietnam War film? It certainly sounds like a recipe for profound disaster. In 1968, as the intrusive prefix to the title tells us, the U.S. military had a unit of soldiers with the special mission to discover and infiltrate the miles-long underground tunnels by the Viet Cong. These “tunnel rats” were tasked with clearing out these deadly and cavernous mazes, where the Viet Cong ate, slept, and even walled up their dead within. Sergeant Vic Hollowborn (Michael Pare, who else?) heads the unit and has to shape up the new recruits into formidable fighters. Hollowborn lectures his young men on the dangers of “Charlie” and even orders them to execute an enemy prisoner. “Charlie’s gonna kill you just for being here,” he warns. “He doesn’t care if you’re a nice guy.” This nugget of wisdom is proven true over the 90-minutes of the film. The Tunnel Rats unit finds a new tunnel and this discovery eventually leads to the camp being decimated over the course of one hellish night in Vietnam.

When the action goes underground is when the movie gets, remarkably, pretty good. The labyrinthine tunnels dug out by the Viet Cong is an incredibly interesting subject that no Vietnam film has yet to cover with any substantial attention. Did you know that the Viet Cong could smell the smoke or aftershave of a man in those tunnels? They can even tell the brand of cigarette supposedly. Boll’s movie fails to take full advantage of its intriguing wartime setting. I wanted to know more about the particulars of the duties entrusted to the Tunnel Rats, a real unit of the armed forces with a high mortality rate. I wanted to know about the incredible construction of these tunnels and the dangers they posed to the U.S. armed forces. I wanted to know about the day-to-day lives of men who specialize in the tunnels, and I really wanted to learn about the unique minutia of hand-to-hand combat within such confined space. Fighting for your life in such limited space, now that’s interesting stuff.

While Boll’s war movie fails to explore the tunnel setting in detail, Tunnel Rats has its fair share of quality suspense, mostly thanks to the claustrophobic quarters. It’s hard to make such limited space exciting for so long, but Boll manages to crank up the tension by pressing in on his actors. Watching the soldiers crawl on their hands and knees, possibly for miles, never knowing what trap might be in wait, well it makes for some intense feeling of dread. There are two standout scenes involved in the tunnels. The first involves a soldier that discovers a tautly wound tripwire leading to a grenade. Boll carefully follows the soldier steadily try to diffuse the booby trap and it almost reaches a nerve-wracking sense of unease. The second standout scene involves a solider that killed a Viet Cong member in the tunnel. The U.S. soldier has to use a simple knife to pulverize the corpse of the Viet Cong member just so he has enough room to pass by inside the tunnel. The scene is shot in tight close-ups as we watch the sickening repetitive motions of the soldier doing his best and bloodiest work just to move on by. It’s harrowing and empathetic. The above ground stuff has all the requisite chaotic explosions and soldiers being gunned down, but it’s the action underground that is surprisingly steady and consistently well designed.

The cinematography by Boll regular Mathias Neumann is a great strength. It takes a page out of Janusz Kaminski’s playbook, Spielberg’s long-time cinematographer, by layering in streams of milky light. The colors are muted and the camerawork is mostly handheld. Sure the visual aesthetic is a tad derivative (it made me wonder if Boll rented Tigerland before filming) but it’s a fairly good copy. The South African location shoot makes for a pleasing facsimile of Vietnam. Neumann also finds new and interesting ways to film the tunnels so that the setting doesn’t lose any of its unsettling power. Watching soldiers crawl along the inky blackness with but a flimsy flashlight provides for some spooky imagery that doesn’t even have to resort to cheap scare tactics. However, there are far too many spinning low-angle shots that do little more than stare at the tree canopies above. It’s like the cameraman is in the constant process of nearly passing out. 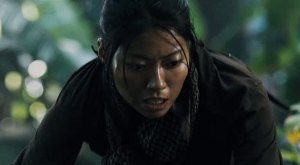 The war as hell metaphor is familiar and potent, but Tunnel Rats lacks a deeper message. The film wallows in war clichés, particularly in its opening 20 minutes. The bland stock soldiers are interchangeable. They wax philosophically about the nature of God and war, talk about their hopes and dreams back home, and recount stories about laying under the stars and enjoying mom’s home cookin’. They bond, they share pictures of their respective sweethearts, and then they naturally meet a grisly end. One newbie even asks, in all seriousness, “You ever get scared out there?” The dialogue is pretty lousy and rife with clichés. The movie isn’t too subtle with some of its metaphors either, like when a Viet Cong woman literally tries washing the blood off her hands after executing a U.S. soldier. While the film is clearly told from the perspective of American soldiers, and the Viet Cong are antagonists, Boll takes time to show fairness to the enemy. One female warrior (Jane Le) fights to protect her young children. Another Viet Cong soldier fights to avenge the honor of a woman who was raped by American troops. The only message that appears to emerge from the movie occurs in the final minutes, when Boll seems to cram in a heavy-handed attempt at moralizing, a “we’re in this together, folks” kind of message that involves nearly four minutes of uninterrupted digging. But then Boll subverts that message and kills it, ending the film with the same sense of hopelessness. Tunnel Rats doesn’t bother to explore human insights and the nature of war and feels decidedly minor, following one all-out skirmish on one day of the Vietnam War. I wish Boll realized the potential his narrative had, which is not something you’ll likely often see me write. Tunnel Rats seems to be too content to be an effective horror movie dressed up as a war flick.

What is it about war movies that seem to excuse exploitation? It seems that a filmmaker can showcase tremendous gore and horrific bloody violence when they can cloak the material under the illusion of being true to life. Somehow filmmakers believe that wallowing in blood and guts is honoring the valor of those who served. This can be true, like the opening onslaught of Saving Private Ryan. But this can also be rubbish. War films can be just as exploitative as any other genre of film. Tunnel Rats has just as gruesome violence as Boll’s other horror movies, but because it has a war setting does not automatically give the violence and gore more integrity or meaning.

Tunnel Rats is a resounding achievement for the talents of Uwe Boll. It cannot even be passive-aggressively complimented as being “competent.” No, this is actually a halfway good movie that has some unsettling moments amid the suspense and chaos. The underground tunnel sequences manage to find an eerie intensity and are the best part about the movie. Thankfully Boll seems to realize this, which is why a majority of the movie alternates between various soldiers finding their way amongst the underground maze. The acting is actually some of the strongest yet in a Boll movie. Tunnel Rats would have greatly benefited from more attention being spent on the details of the life of a tunnel rat (it seems like a suicide mission).  The movie never really feels fully realistic but at the same time it eschews being campy. It’s not as nearly as serious and artistically daring as the pinnacle Vietnam War flicks, but then again the movie is also better than plenty of other recent war films that have the tendency to either be jingoistic or fetishize the brutality of war.

In a twist of fate, Boll is actually developing a first-person shooter video game based upon his Tunnel Rats movie. The man who takes video game properties and makes crummy movies out of them has now made a decent-to-somewhat-good movie and developed a video game from it. Now it’s only a matter of time before Boll adapts the game into another crummy movie.