Famed musician/lyricist Stephen Sondheim’s tale of murderous barbers, cannibalism, and poisoned hearts first debuted on Broadway in 1979. Sondheim has been very protective of his material when it comes to film rights, but it wasn’t until the combination of visionary director Tim Burton and acclaimed actor Johnny Depp that Sondheim allowed his revered musical to be made into a movie. The result is faithful production that expands the scope of the musical while maintaining an intimate, chamber-music feel. Sweeney Todd flirts with being a masterwork but settles for being incredibly damn entertaining.

Benjamin Barker (Johnny Depp) returns to London after 15 years in prison on a flase charge. Judge Turpin (Alan Rickman, suitably creepy) wanted Barker’s wife for his own and conspired to have the barber sent away. Now under the auspices of Sweeney Todd, Barker has come back to seek his wife and daughter. He sadly learns that his wife is dead and his teenaged daughter, Johanna (Laura Michelle Kelly), is the ward of the Judge. Sweeney reopens his barber business above a flagging pie shop run by the eccentric Mrs. Lovett (Helena Bonham Carter). Sweeney plots his revenge against the Judge and his henchman, Beadle Bamford (Timothy Spall, suitable rat-like). Anthony (Jamie Campbell Bower), who traveled with Sweeney back to London, has set his sights on Johanna and intends to run away with her as soon as she can escape the Judge. Meanwhile, a rival barber named Pirelli (Sacha Baron Cohen) recognizes Sweeney from the old days and wants his silence paid for. It’s not too long before things get dicey, throats get cut, and people get turned into meat pies.

People unaware of the Sondheim musical are going to be in for a big shock. The film is about 80 percent sung, and the singing never rises to big, show-offery numbers of crescendo power vocals; the songs are more in the variety of speaking and vocals frequently overlap. The movie has greater clarity to the lyrics, and for the first time I as able to actually decipher Joanna’s words in the song “Green Finch and Linnet Bird.” Fans of traditional musicals, the kind that feature songs centered on female deer or large corn exporting states, may be aghast at how adult and violent the musical is. It’s just as much a grand horror movie as it is a musical. No doubt people are not generally accustomed to soaring medleys set to gashed throats and spurting blood. Sweeney Todd is captivating tale where almost all the characters are villains in some sense, and yet you do build sympathies even after innocents are killed and baked into flaky desserts.

Unlike other recent big screen versions of popular Broadway song-and-dance shows, Sweeney Todd is not simply the stage version transported to a bigger stage. This is a movie, through and through, and a perfect marriage. Burton is the perfect visionary to filter the twisted sensibilities of Sondheim’s masterpiece onto the silver screen. As a director, his work has been artistically backsliding since the start of this decade, but Sweeney Todd puts a firm stop to that. The technical aspects of Sweeney Todd are brought to life with great care and imagination. The Gothic sets are gorgeous and the costumes and cinematography are fitfully drab and dour, like everyone is living in a silent movie devoid of color; it takes a lot of hard work to create a near monochromatic playing field for the actors. And so when the blood does splash, and oh does it splash, the film pops with vivid color. Sondheim’s playful lyrics and rapturous music has never sounded better; it practically swoons.

The movie opens up the play in ways that a staged performance never could. Instead of keeping a distance from the bloodletting, usually something symbolic or as graphic as coloring a red line across a victim’s neck, Burton thrusts the audience right into Sweeney’s shop. The blood sprays in bright geysers and the violence is fully realized, fully felt, even if it’s never terribly realistic. The full weight of Sweeney’s vengeance and eventual destructive madness can be felt when the audience is witness to its wrath, and that includes the graphic murders. The medium of film ups the horror elements and transforms Sweeney Todd into a stronger work by amplifying the tension. The last scene with Mrs. Lovett is far more haunting than anything that could have been achieved on a stage. Burton also adds lots of dark humor thanks to his open visual palate, like during the song “By the Sea” where Mrs. Lovett fantasizes about her and Sweeney cozying up together in different scenarios. The film transports the viewer to the different pretend locales all the while Depp remains gruff and indifferent. He maintains the same curmudgeon from fantasy postcard after fantasy postcard. It’s the cheeriest segment in a grimly perverse musical that could rival Hamlet for dead bodies.

In an effort to slice a three-hour musical to a manageable two-hour movie, screenwriter John Logan (The Aviator, Gladiator) has pruned the story down to the essentials, namely everything that impacts Sweeney’s ultimate pursuit of vengeance. Johanna and Anthony, the hopeful lovers, have been pared down the most. Their only scenes now revolve around intruding upon Sweeney or helping him meet his venomous goals. The lecherous songs the Judge sings to himself about his lust for Johanna has also been cut (my wife was severely disappointed by this cut, saying, “You’ve got the Rick, come on!”). The most notable omission is the opening medley “The Ballad of Sweeney Todd” that serves as a Greek chorus-like overview of the sordid tale ahead. The song provides a lot of back-story and exposition that can be more easily covered by Burton fashioning visual flashbacks of Sweeney’s former life. The ballad and other absent songs are still used instrumentally throughout the film. Logan has also turned Toby (Ed Sanders), Pirelli’s assistant, into a much younger character, turning him into an urchin boy with fresh memories of life in a workhouse. I’m not entirely sure Toby’s protective song to Mrs. Lovett “Not While I’m Around” becomes an ode to puppy love and loses some believability. Also, normally Toby is played as a man-child who isn’t entirely whole in his mental faculties; however, the movie version turns him into a plucky Oliver extra. It seems less devastating and tragic.

But what about the singing? Depp won’t be knocking down doors on Broadway anytime soon but he delivers a very satisfying baritone that, while lacking in power or refinement, delivers in spades with emotion. His singing is full of great texture. His song “My Friends,” an ode to being reunited with his razors, is full of brio and nuanced longing, but he really shows his talent when Sweeney loses it. He’s a man obsessed with vengeance and when it escapes his grasp he snarls with scary intensity. When he launches into “Epiphany,” where he determines the whole human race is fit to have their throats slit, he barks at strangers on the street and howls at the sky, smiling at his glistening razors in hand. What can be forgotten with musicals is that there is so much more to a performance than simply an adept ability to sing the right notes. With Sweeney, Depp spins an incredibly rich performance that plumbs the dark recesses of a man whose only purpose is vengeance. In the end, when he’s saturated in blood and the full reality of his actions is upon him, Depp goes from remorse to psychosis to horror to acceptance in, like, a minute flat. Seeing such a classic Broadway character done justice by an actor of Depp’s immense talent is thrilling and a bit of a relief to Sweeney fans. 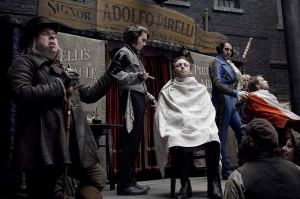 Carter has the weakest, thinnest voice of the cast. Mrs. Lovett is a larger than life figure that has been played on Broadway by the likes of Angela Lansbury and Patti LuPone. The role is usually played more boisterous, more comically broad. It’s a juicy part and full of brash bravado. Carter stumbles through “The Worst Pies in London” and she seems to step all over her lines, rushing through and losing the comedic flavor. But like I said before, a performance is so much more than singing, and it is here where Carter imbues great complexity to her role. Her unrequited love for Sweeney consumes her and her relationship with Toby places her in an awkward predicament. Carter flashes a wealth of emotions through the power of her eyes. It’s a battle between maternal and sexual urges. Stylistically she resembles a rag doll someone tossed in the trash but it all works.

It’s refreshing and exhilarating to see a perfect marriage of material and artistry. Burton has transported Sweeney Todd into a faithful and jubilantly dark movie that doesn’t shy away from the grotesque. It’s a stirring, wonderfully Gothic rendition of Sondheim’s masterpiece. Sweeney Todd is blissful, spirited entertainment that’s not exactly for the squeamish, but this is one musical that can simultaneously touch the heart while turning the stomach.