In 2001, Steven Soderbergh’s remake of Ocean’s Eleven was a giant surprise. It was a blast of fun with an impressive collection of Hollywood royalty. It had clever dialogue, fun characters, and a gala of amusing plot twists. It was one of the breeziest, most entertaining movies in years. Now, come late 2004, Ocean’s Twelve is released with the entire cast returning, including the lovely Catherine Zeta-Jones in tow. Expectations are high for another glitzy romp, but what you’re left with in Ocean’s Twelve is all glitz and no romp.

It’s been three years after the gang robbed ruthless casino owner Terry Benedict (Andy Garcia) of 160 million dollars. Benedict tracks down each member of Ocean’s Eleven and gives them the same ultimatum: either pay back what they stole, with interest, in two weeks or they’ll be killed. Danny Ocean (George Clooney) leaves his attempts at normal home life with Tess (Julia Roberts) and reassembles the team, many of whom have burned through their shares of the millions. Danny and his right-hand man Rusty (Brad Pitt) figure they’re too hot stateside so they’ll need to travel overseas if they’re to steal their fortunes. Linus (Matt Damon) also wants to have a greater role in the heist this time around.

In Europe, Ocean is challenged by a French playboy (Vincent Cassel) who moonlights as the notorious thief, the Night Fox. The challenge is to see who can steal a priceless Faberge egg, and if bested the Night Fox promises to pay all of Ocean’s debts to Benedict. Hot on the heels of both thieves is Isabel (Zeta-Jones), an expert police officer that also happens to be the former girlfriend to Rusty.

Ocean’s Twelve does not work as a heist picture. For starters, the audience has no idea what’s going on for most of it. A general heist movie bylaw is to explain what the heist will entail, and then we watch the team hit it step by step. Forget that. In Ocean’s Twelve we’re never told how they are going to do their heist, and as they commence with their plan it’s not surprising to an audience, only confusing. I had to wait until the very end for some character to go into a monologue to explain how they accomplished their heist, and let me say, it was not worth two hours of waiting and scratching my head. The result seems to push away an audience instead of involving them in the fun of the scheme.

The story doesn’t utilize the talents of the assembled members. There’s a reason you hire a demolitions expert or a pick pocket, and that’s to let them work their skill. Well in Ocean’s Twelve we get none of that. Most of the cast’s skills are not ever put to use, which further gunks up a heist movie. The movie really errs by putting many of its eleven on ice for long stretches of the film. Around the second act almost everyone gets arrested. Pity poor Bernie Mac, who is in jail for near the whole movie. It seems that Soderbergh doesn’t know what to do with all his characters, and the new additions, so he stashes them away for long stages of time hoping an audience won’t notice.

Soderbergh is in danger of becoming a parody of himself. His usual narrative flourishes are present, including jumps in time and perspective; however, they don’t add up to much except unnecessary showmanship. The nonlinear leaps and shell game of information do not add to the film. Soderbergh keeps his audience in the dark for too long and then cheats us with the ending. Ocean’s Twelve is a good looking film (the vistas look beautiful), but it’s a good looking movie with nowhere to go. What’s even more frustrating is the ending to Ocean’s Twelve. You see, in the end we find out that the last hour plus of the movie was unnecessary. Yes, the movie actually makes a reveal that nullifies over half of the film. It’s cheap and unappreciated. Ocean’s Twelve, there’s a difference between tricking an audience and conning them. Maybe some day you’ll realize this. 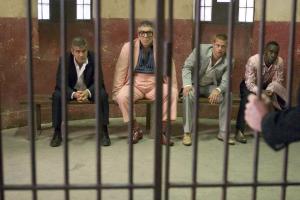 The new storylines never really develop. Zeta-Jones doesn’t add much besides another authority figure to chase after Ocean and the boys. Her subplot involving finding her master thief father is abrupt and easy. The best new addition to Ocean’s Twelve was the prospect of a rival, but again nothing really happens with our French thief. He’s more of a catalyst for the plot than anything else, and it’s a shame, because he could have opened the door for a great film pitting two competitive teams of thieves against each other.

Ocean’s Twelve is too satisfied with itself to be that entertaining. It’s now actually reminiscent of the 1960 original film (my grandmother swears it’s wonderful, take that for what you will), starring the Rat Pack. Plot and logic are secondary to a bunch of cool characters having fun. I really enjoyed Ocean’s Eleven (the 2001 film, not my grandmother’s preferred version), but this new sequel lacks any charm and verve. I can’t even say there were many good scenes, just some good ideas that they didn’t fully actualize, like stowing Yen in baggage and then losing their luggage (nothing comes of this). There’s a fun scene involving Topher Grace spoofing his own micro-celebrity, but beyond that many of the scenes and ideas don’t seem developed. The best moment of Ocean’s Twelve, for me, was when I saw Eddie Izzard, the funniest man on the face of the Earth and then some, chat with Hollywood’s A-list on screen. God bless you Eddie Izzard.

Ocean’s Twelve wilts in comparison to its witty, effervescent predecessor. Ocean’s Eleven was fun and hip but didn’t need to coast on star appeal. It had a believable heist, engaging personalities, and it was fun because we knew what was going on and it mattered! I’m sure the cast of Ocean’s Twelve had a blast making the movie together, and their friendly camaraderie shows, but when I left the theater I felt like I had been stuck with the bill for someone else?s good time.